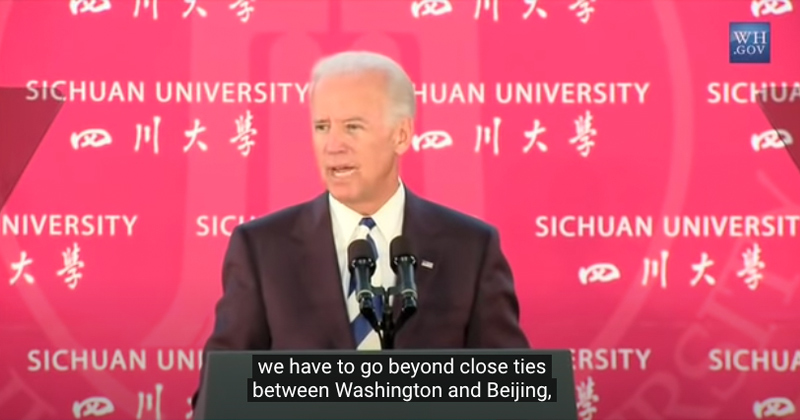 Presumptive Democrat presidential nominee Joe Biden once called for the Chinese Communist Party’s (CCP) ties with the US to extend into “all levels of government,” classrooms, laboratories and boardrooms.

In a 2011 speech at Sichuan University in Chengdu, China, Biden said the US government had already been working with Chinese communist counterparts to extend their influence into all of those fields.

“The U.S.-China relationship has also improved dramatically in the past 30 years,” Biden said at the time.

Elsewhere in his speech, Biden went on to praise a “rising China” as a “positive development” for the US, and claimed it would “fuel economic growth and prosperity and it will bring to the fore a new partner with whom we can meet global challenges together.”

Sichuan University, where Biden’s speech was delivered, is also operated by the CCP, which enlists student snitches to report professors or fellow students who demonstrate disloyalty to the party.

From The National Pulse:

Even the location of Biden’s speech, the final stop of his four-day China trip of which increased ties with the country was the main takeaway, speaks volumes: Sichuan University is a CCP funded and controlled institution with former high-ranking party apparatchiks on its board.

The university even utilizes “student information officers” tasked with identifying professors and peers who “show any sign of disloyalty to President Xi Jinping and the ruling Communist Party” and has a track record of intellectual property theft.

Biden’s commitment to fuse with Beijing is not only illustrative of how the Obama administration was in bed with Chinese Communist Party, but his reference to “laboratories” takes on a whole new meaning as the coronavirus that ravaged the globe is said to have originated in a bio-weapons lab in Wuhan.

Joe Biden wants you to know that he will beat Joe Biden.