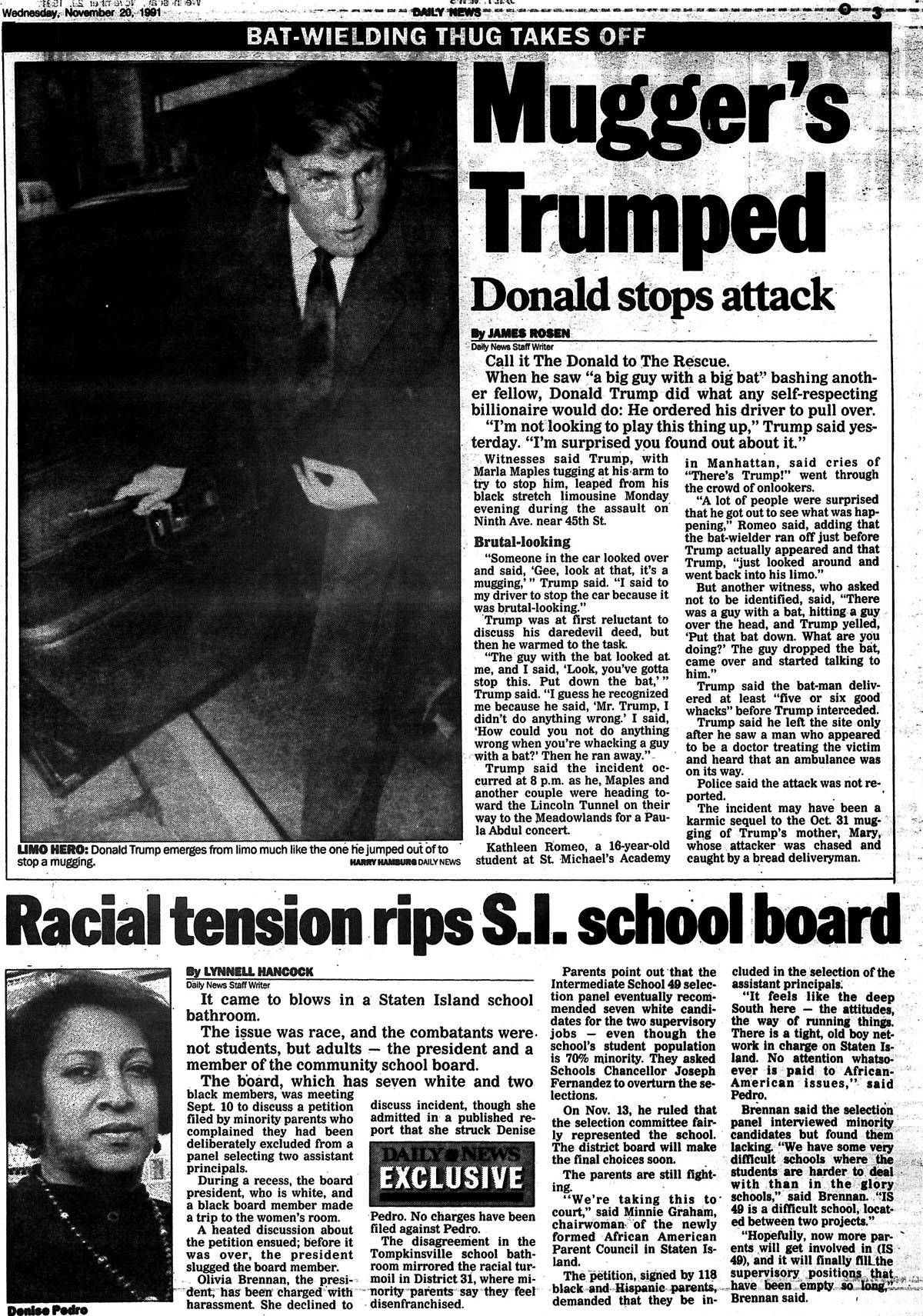 Believe it or not, US President Donald Trump once stopped an armed attack on the streets of New York City. 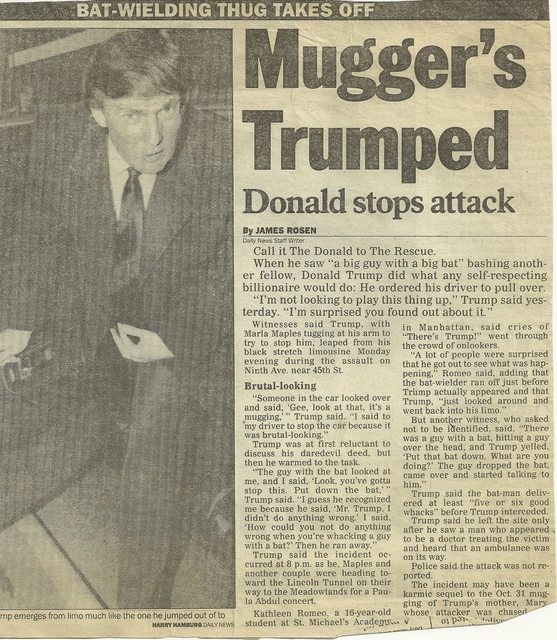 The incident was chronicled by The New York Daily News on November 20, 1991.

In an article titled, “Mugger’s Trumped: Donald stops attack” [sic], the current president is instrumental in stopping a mugging he sees occurring while riding in his stretch limo with former wife Marla Maples en route to a Paula Abdul concert.

Witnesses say the businessman saw the mugging taking place, then confronted the bat-wielding attacker who was so surprised to see Trump he fled.

Trump played down his heroic efforts, telling the Daily News, “I’m not looking to play this thing up… I’m surprised you found out about it.”

The report is seeing renewed interest in the wake of the president’s comments claiming he would have ran into the Marjory Stoneman Douglas High School two weeks ago to confront an armed gunman:

“You know I really believe – you don’t know until you’re tested – but I think I, I really believe I’d run in there even if I didn’t have a weapon. And I think most of the people in this room would have done that too. But the way they performed was really a disgrace.”

Read the November 20, 1991 New York Daily News article in its entirety below:

Call it The Donald to The Rescue.

When he saw “a big guy with a big bat” bashing another fellow, Donald Trump did what any self-respecting billionaire would do: He ordered his driver to pull over.

“I’m not looking to play this thing up,” Trump said yesterday. “I’m surprised you found out about it.”

Witnesses said Trump, with Marla Maples tugging at his arm to try to stop him, leaped from his black stretch limousine Monday evening during the assault on Ninth Ave. near 45th St.

“Someone in the car looked over and said, ‘Gee, look at that, it’s a mugging,’ ” Trump said. “I said to my driver to stop the car because it was brutal-looking.”

Trump was at first reluctant to discuss his daredevil deed, but then he warmed to the task.

“The guy with the bat looked at me, and I said, “Look, you’ve gotta stop this. Put down the bat,”‘ Trump said. “I guess he recognized me because he said, ‘Mr. Trump, I didn’t do anything wrong.’ I said, ‘How could you not do anything wrong when you’re whacking a guy with a bat?’ Then he ran away.”

Trump said the incident occurred at 8 p.m. as he, Maples and another couple were heading toward the Lincoln Tunnel on their way to the Meadowlands in New Jersey for a Paula Abdul concert.

Kathleen Romeo, a 16-year-old student at St. Michael’s Academy in Manhattan, said cries of “There’s Trump!” went through the crowd of onlookers.

“A lot of people were surprised that he got out to see what was happening,” Romeo said, adding that the bat-wielder ran off just before Trump actually appeared, and that Trump, “just looked around and went back into his limo.”

But another witness, who asked not to be identified, said. “There was a guy with a bat, hitting a guy over the head, and Trump yelled, ‘Put that bat down. What are you doing?’ The guy dropped the bat, came over and started talking to him.”

Trump said the bat-man delivered at least “five or six good whacks” before he interceded.

Trump said he left the site only after he saw a man who appeared to be a doctor treating the victim and heard that an ambulance was on its way.

Police said the attack was not reported to police.

The incident may have been a karmic sequel to the Oct. 31 mugging of Trump’s mother, whose attacker was chased and caught by bread deliveryman.