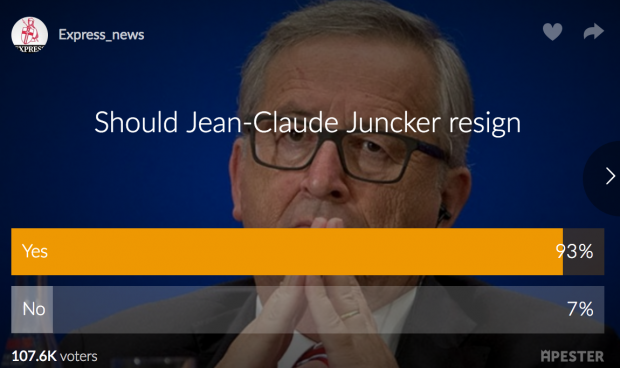 European Union bureaucrats are outraged over the prospect of new U.S. tariffs, with EU Chief Jean-Claude Juncker vowing to engage in a trade war he may have helped ignite when he called for a break-up of the U.S. last year.

“So now we will also impose import tariffs,” Juncker said on Friday night in response to President Trump’s announcement. “This is basically a stupid process, the fact that we have to do this. But we have to do it. We will now impose tariffs on motorcycles, Harley Davidson, on blue jeans, Levis, on Bourbon. We can also do stupid. We also have to be this stupid.”

The European Union, wonderful countries who treat the U.S. very badly on trade, are complaining about the tariffs on Steel & Aluminum. If they drop their horrific barriers & tariffs on U.S. products going in, we will likewise drop ours. Big Deficit. If not, we Tax Cars etc. FAIR!

“The European Union, wonderful countries who treat the U.S. very badly on trade, are complaining about the tariffs on Steel & Aluminum,” Trump tweeted shortly after Juncker’s statement. “If they drop their horrific barriers & tariffs on U.S. products going in, we will likewise drop ours. Big Deficit. If not, we Tax Cars etc. FAIR!”

The Times of London reports that Juncker is ‘drawing up a hit list of US brands’ in preparations for a trade war, despite a severe economic imbalances already favoring many European countries.

Juncker has shown a consistent lack of diplomacy in EU-US relations, exhibiting particular hostility when he threatened to back secession movements in multiple U.S. states last year after President Trump praised the success of Brexit.

“Brexit isn’t the end. A lot of people would like it that way, even people on another continent where the newly elected US President was happy that the Brexit was taking place and has asked other countries to do the same,” Juncker said in an outburst British media called jaw-dropping. “If he goes on like that I am going to promote the independence of Ohio and Austin, Texas, in the US.”

A poll conducted by the Daily Express in the wake of Juncker’s comments found that 93% of over 100,000 respondents felt he should resign from his unelected position as President of the European Council.

Juncker was scheduled to make his first-ever appearance at the World Economic Forum in Davos, Switzerland, earlier this year, however he canceled at the last minute, citing an ‘illness.’ Instead, President Trump stole the show, dominating headlines before, during, and after his visit.