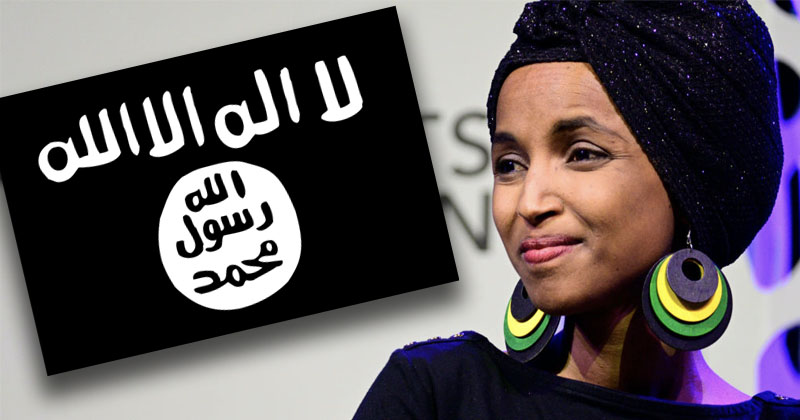 President Trump is under fire by the MSM after he correctly pointed out Ilhan Omar’s (D-Minn.) anti-American rhetoric over the weekend and her affinity for radical Islamic groups like Al-Qaeda.

“I hear the way she talks about Al-Qaeda…about the World Trade Center being knocked down, ‘some people’…these are people that in my opinion hate our country,” Trump said Monday outside the White House. “Says horrible things about Israel, hates Israel, hates Jews — hates Jews.”

Trump blasts Rep. Ilhan Omar (D-MN): “I hear the way she talks about Al-Qaeda … about the World Trade Center being knocked down, ‘some people,’ … these are people that in my opinion hate our country … says horrible things about Israel, hates Israel, hates Jews, hates Jews” pic.twitter.com/9SK9jqqoEL

Omar not only spouted anti-Semitic remarks and downplayed 9/11, she also pleaded with a federal judge in 2016 to show “compassion” to 9 Minnesota men trying to join ISIS in Syria, claiming they were only seeking violence “to combat marginalization” despite the fact Islam is the fastest-growing religion in the planet.

“The best deterrent to fanaticism is a system of compassion. We must alter our attitude and approach; if we truly want to affect change, we should refocus our efforts on inclusion and rehabilitation,” Omar wrote in a letter to Judge Michael Davis.

“A long-term prison sentence for one who chose violence to combat direct marginalization is a statement that our justice system misunderstands the guilty. A restorative approach to justice assesses the lure of criminality and addresses it.”

Omar then absurdly claimed that the 9 ISIS members were only driven to violence to “fight perceived injustice,” when in fact ISIS’s stated goal is to create a global Islamic caliphate under Sharia law, and kill every “infidel” who doesn’t submit.

“The desire to commit violence is not inherent to people — it is the consequences of systematic alienation; people seek violent solutions when the process established for enacting change is inaccessible to them. Fueled by disaffection turned to malice, if the guilty were willing to kill and be killed fighting perceived injustice, imagine the consequence of them hearing, ‘I believe you can be rehabilitated. I want you to become part of my community, and together we will thrive.’ We use this form of distributive justice for patients with chemical dependencies; treatment and societal reintegration. The most effective penance is making these men ambassadors of reform.”

Given her past defense of radical Islamists, it’s no surprise Trump called her out on her race-baiting and anti-American rhetoric, forcing Democrats to circle the wagons in defense of their far-left colleagues that most independent American voters view poorly.