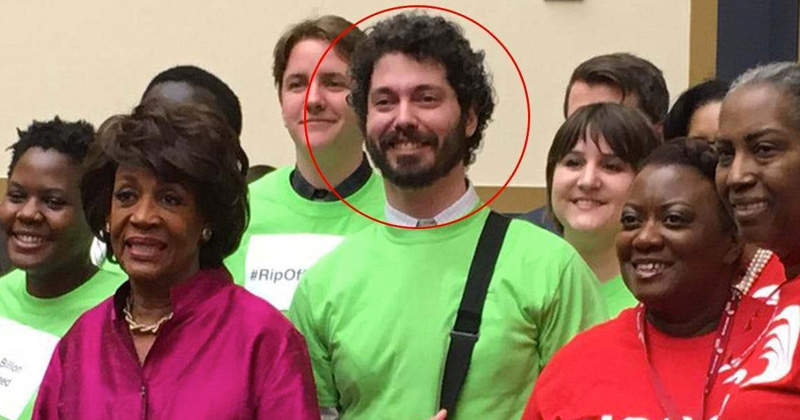 Rep. Maxine Waters (D-Cali.) is facing scrutiny over a photo of her with an Antifa leader who was arrested for assault earlier this year.

The 2016 photo shows Waters attending an Americans for Financial Reform meeting and standing near Joseph Alcoff, a self-proclaimed Communist who allegedly led an Antifa mob attack against two Marines at a “We The People Rally” in Philadelphia in January.

Maxine Waters in a photo-op with Joseph Alcoff. By day, Alcoff worked with congressional Democrats. Online, he advocated for brutal political violence. He’s facing felony charges for his alleged involvement in an antifa mob beating of two marines. https://t.co/3lw0BbGDSH pic.twitter.com/0zYfOW14Mn

Alcoff, the supposed leader of the Antifa group Smash Racism D.C. which protested outside Fox News anchor Tucker Carlson’s home in November 2018, was arrested along with two other Antifa members on felony charges of aggravated assault, ethnic intimidation and conspiracy.

Before his arrest, however, Alcoff was a highly influential member of the Democrat party.

His endorsement apparently mattered when several congressional Democrats in February 2018 issued press releases with his quote backing their bill on regulating payday lenders.

As the payday campaign manager for the liberal group Americans for Financial Reform, Alcoff participated in congressional Democratic press conferences, was a guest on a House Democratic podcast and met with senior officials at the Consumer Financial Protection Bureau from 2016 through 2018.

Following this weekend’s Antifa firebomb attack on an ICE detention facility in Tacoma, Washingotn, which left the attacker dead, many on Twitter are asking Waters if she will condemn Alcoff’s attack and disavow his support.

Any comment on this one @RepMaxineWaters? Do you condemn or do you condone Joe's actions? https://t.co/LYSzt99l9X

Hi, @RepMaxineWaters, care to comment on your photo-op with this Antifa thug charged with the mob beating of two marines?

…Is this what you meant when you said, “You get out and you create a crowd! And you push back on them!”? https://t.co/Lt7lFOzman