A tweet from 2012 reveals Donald Trump once rejected an invitation to appear on comedian Chelsea Handler’s E! Network TV show, providing a motive for her recent anti-Trump outbursts.

In a short Nov. 19, 2012, tweet, the then-future President of the United States refused to appear on Handler’s “gross” Chelsea Lately show.

.@chelseahandler–stop calling my office for me to do your rather "gross" show–I have less interest in you than Andre.

“[email protected]–stop calling my office for me to do your rather “gross” show–I have less interest in you than Andre,” Trump wrote at the time, referring to Handler’s on-and-off relationship with hotel magnate André Balazs.

Handler, who supported Democrat Hillary Clinton in the 2016 presidential election, has been in the headlines recently for claiming White House Press Secretary Sarah Huckabee Sanders resembled a prostitute.

“That harlot that they are dressing up and trolloping out every day?” Handler asked in a recent interview that appeared on her discontinued Netflix series Chelsea. “I mean, one day she has no makeup on at all, the next she’s got 6’ long eyelashes, cleavage, and summer whore lipstick all over her face.”

The “feminist” ramped up her attacks against Sanders in a follow-up video this week where another comedian exaggerated how the press secretary does her makeup. 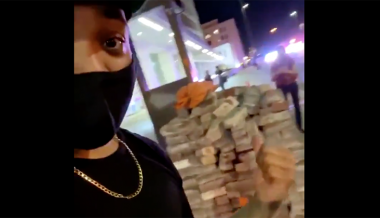