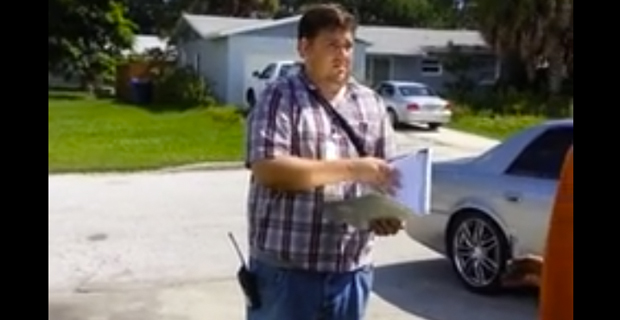 A Florida man was confronted by a county environmental specialist this week and absurdly ordered to keep the smell of his BBQ from leaving his property.

Video of the incident, originally posted to Facebook Wednesday by homeowner Scotty Jordan, shows Pinellas County Environmental Specialist Joe Graham discussing the alleged infraction with Jordan and friends after a nearby neighbor alerted the county.

During the conversation, Graham asserts that the men are in violation of a local “rule” that bans the smell of BBQ from crossing over one’s property line.

“I can smell it again right now, but I’m on your property,” Graham tells the group. “You’re allowed to have it smell on your property, so that doesn’t count, but when I’m on the street, that’s when it counts.”

Astonished by the claim, the cameraman asks Graham how the group, or anyone for that matter, would be able to control where odor travels.

“So we’re supposed to control the smoke and the wind and where it’s blowing it?” he asks.

Graham goes on to suggest that the group move their BBQ on a regular basis in conjunction with wind patterns or purchase a specialized version designed to minimize smoke.

The local ordinance, similar to countless others across the country, falls in line with a longstanding effort from the Environmental Protection Agency that aims to limit everything from BBQs to wood stoves under the guise of reducing pollution.