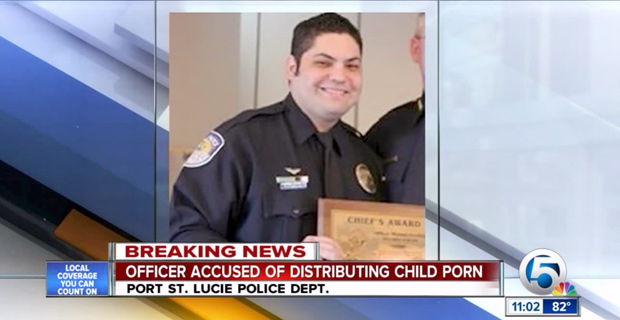 An investigator with Homeland Security accidentally stumbled onto some posts made by Harding under his online name, destheabovee, which showed underage girls performing sex acts with men. The investigator determined that the IP address associated with the uploads/posts belonged to Harding’s cell phone number.

The images found were of pre-school and prepubescence boys and girls.

Port St. Lucie Police Chief John Bolduc said that Officer Harding has been on paid leave since he became aware of the investigation, but that he is now on unpaid administrative leave pending the outcome of his trial.

Harding was named Fort Pierce Police Officer of the Year in 2011. He joined the Port St. Lucie Police Department in 2012. Harding was also shown in this photo, under the heading that states “St. Lucie County’s Officers of the year 2012”