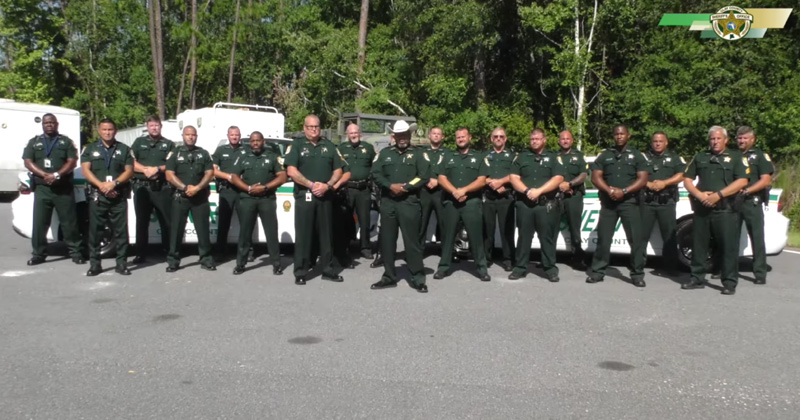 A Florida sheriff says he’ll do what he can to protect residents in his county from violent radical leftists, but warns he could go further and deputize lawful gun owners.

In a public service announcement on Facebook Tuesday, Clay County Sheriff Darryl Daniels disputes the mainstream media’s sympathy for protests that aim to portray law enforcement in a bad light.

The sheriff proceeds to warn violent protesters, who’ve wreaked havoc and torn down statues in major Democrat-run cities in recent weeks, that Clay county law enforcement is ready to take them on.

“If you come to Clay County and you think for one second we’ll bend our backs for you, you’re sadly mistaken,” the sheriff says.

“I know what happens when lawlessness prevails. And in this day and time, God is raising up men and women just like the folks standing behind me who will have strong backbones and will stand in the gap between lawlessness and the citizenry we’re sworn to protect.”

Sheriff Daniels then declares if his department is unable to protect its residents from violent protesters, he’ll deputize gun owners to preserve the county’s quality of life.

“If we can’t handle you, I’ll exercise the power and authority as the sheriff, and I’ll make special deputies of every lawful gun owner in this county and I’ll deputize them for this one purpose to stand in the gap between lawlessness and civility.”

On Monday, footage emerged out of Utah showing a Black Lives Matter protester firing a pistol into an SUV attempting to drive through a mob blocking the road.

Filmed this while covering protests in Provo a few hours ago. Full story in the morning on @UniverseBYU pic.twitter.com/nUB6F3faTR

“The driver, who is in his 60s, was shot and was taken to the Utah Valley Hospital, underwent surgery and has non-life threatening injuries,” reports Jamie White.

The sheriff’s message also comes as police in New York City grapple with protesters in downtown Manhattan amid a $1 billion budget cut, while the city of Seattle moves in to reclaim a six-block area occupied by leftist anti-police protesters in recent weeks.

Alex Jones breaks down the hypocrisy of the BLM movement, when violence against black people is allowed to persist if it serves the leftist collapse agenda.