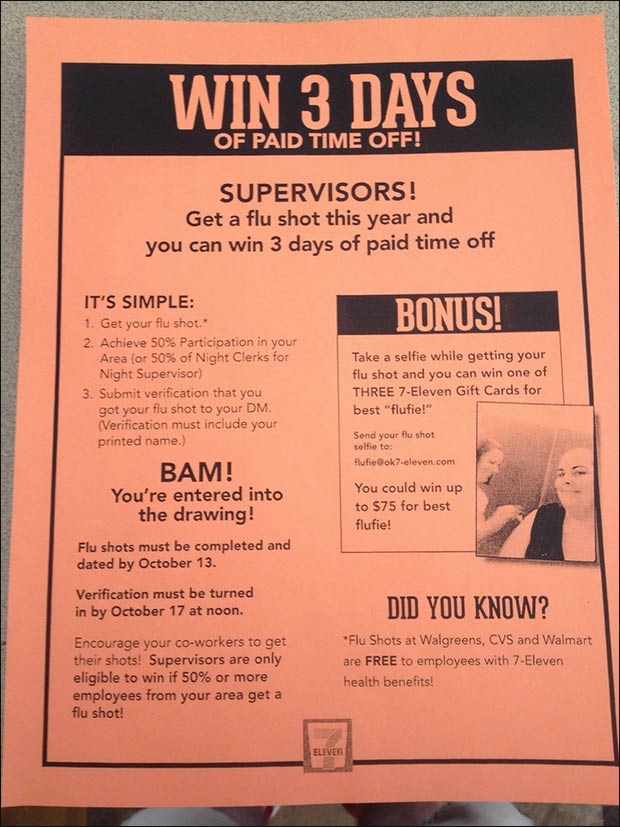 7-Eleven convenience stores in Oklahoma are apparently running contests encouraging their employees to receive flu shots, one of which involves employees taking “selfies” as they receive the injections.

The names of store supervisors who receive flu shots will be entered into a drawing to win paid time off, according to a flyer sent to Infowars by a reader.

“Get a flu shot this year and you can win 3 days of paid time off,” the posted flyer reads, explaining that in addition to receiving the potentially lethal chemical mixture, supervisors must manage to convince 50 percent or more of their employees to also get their shots.

As an added “Bonus!,” an additional contest requires supervisors to take “selfies” while getting jabbed, dubbed “flufies.”

“Take a selfie while getting your flu shot and you can win one of THREE [75 dollar] 7-Eleven Gift Cards for best ‘flufie!,’” the flyer states.

While flu vaccine efficacy and overall safety is still heavily contested, nowhere on the flyer does it notify employees of the potential dangers associated with receiving the lab-made chemical cocktails, which are produced on a yearly basis based on scientific guesswork.

“It’s not possible to predict what this flu season will be like,” the Centers for Disease Control and Prevention admits on their website. Despite this, the federal health authority still “recommends a yearly flu vaccine for everyone 6 months of age and older,” as well as for pregnant mothers.

The convenience store chain’s flyer neglects to mention the fact that numerous people have suffered extreme complications, including death, stemming from flu vaccines, which contain dangerous compounds such as formaldehyde and the neurotoxin aluminum.

Just last year, health authorities and flu vaccine advocates scrambled to contain the fallout from a report in which a Utah mother came forward with shocking allegations that her healthy son died after receiving a routine flu shot. “Chandler Webb’s direct cause of death was swelling of the brain, his mother said,” reported The Salt Lake Tribune. “We’re angry because we believe it’s the flu shot that [caused] it,” the boy’s mother stated.

Scores of others have experienced life-altering adverse reactions following vaccine injections, to the point that the U.S. government has had to appoint a special governing body to deal solely with vaccine injury cases, and a special vaccine court which hears the cases and awards money to victims or their surviving family members.

A program known as the Vaccine Adverse Event Reporting System (VAERS) is instrumental in paying off families of victims who experience debilitating side effects resulting from vaccinations. “Each year the VAERS receives 10,000–20,000 reports of adverse events following immunization by more than 10 million vaccines,” the VAERS Wikipedia entry states.

Last year, we also reported on the termination of a pregnant hospital nurse who refused to take a mandatory flu shot after citing concerns over her unborn child’s health. In an interview with the UK’s Daily Mail, Dreanna Breton said she was reluctant to take the shot after witnessing adverse flu vaccine reactions first hand. “I have taken care of patients who have become paralyzed after having the shot and if that can happen to a full grown person who knows what can happen to a growing fetus,” she stated.

In the face of overwhelming evidence, the CDC has also had to admit that close to a thousand children were permanently damaged by a vaccine less than five years ago. During the 2009 swine flu pandemic, around 800 children who received GlaxoSmithKline’s Pandemrix flu vaccine developed the sleep disorder narcolepsy.

Recall that this is the same CDC that felt it necessary to kill webpages on their site detailing how, between the years 1955 and 1966, 10 to 30 million Americans may have received polio vaccines contaminated with a primate form of cancer virus. The federal agency even went so far as to have Google remove cached versions of the pages.

When the winning 7-Eleven supervisor is chosen, the three paid days off might come in handy, given that many people who receive the shot report getting sick after taking the jab.

One very public example of this occurred at the beginning of last year when former CNN host Piers Morgan speculated on national television that his flu-like symptoms could be related to a flu shot he also received on TV just ten days earlier.

The correlation between receiving the flu shot and becoming ill is so prevalent that, in order to protect the flu vaccine industry, the CDC has had to run defense by suspiciously claiming that, “You cannot get the flu from a flu shot,” while at the same time admitting that there is some degree of risk that the vaccine will cause serious harm or death.

While the percentage of adverse vaccine side effects may be low from a statistical standpoint, the threat still remains and warrants mention in a contest involving taking the flu shot.