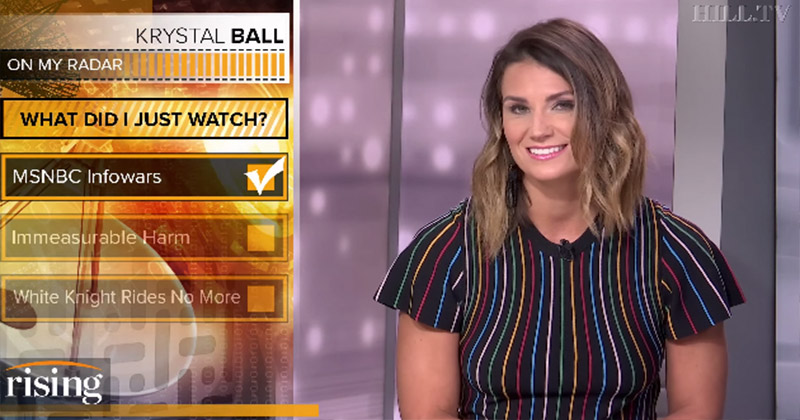 On Thursday’s broadcast of Hill.TV’s “Rising,” former MSNBC host and current Hill.TV host Krystal Ball stated that at times MSNBC engaged in “Infowars conspiracy theory” on Russia and “this whole setup has done more damage to the Democrats’ chances of winning back the White House than anything that Trump could ever have dreamed up.”

Ball began by saying, “Now, this critique is not meant to be personal to the anchors and the commentators there, many of whom I know, some of whom are actually close friends, having worked at that network for five years, but nearly all of whom got swept up in the ratings bubble that was feverish Russian conspiracy theories. At MSNBC, as in all things, systems and incentives are far more important for analyzing any particular situation than individual personalities. However, I dare to say, some talent did drink more deeply of the Russia conspiracy waters than others. Rachel Maddow, you’ve got some explaining to do.”

She continued, “I am not like a Glenn Greenwald who thinks this was all ridiculous and that the Trump campaign did nothing nefarious vis-à-vis Russia. The president’s team clearly sought to work with Russia. They used Russian illegal activity to their own benefit and then they lied about the whole mess to try to cover it up. Those are the facts, and it is a damning set of facts. But it does not feel like a damning set of facts when for months MSNBC built segment after segment, show after show on building anticipation for a big reveal when we would learn the true depths of Trump’s fealty and direct conspiracy with Putin.”

Ball specifically cited the network having New Yorker writer Jonathan Chait and Louise Mensch on and stated, “Seriously, this is not journalism. It is Infowars conspiracy theory.”

Ball further stated, “Now, CNN, and many other outlets are also clearly not blameless in this hype machine, and the Democratic Party was plenty happy to engage in this speculation as well, as Saagar just pointed out. Individual members clearly loved that sweet cable news spotlight, but I single out my former employer in particular, in part because they were certainly the worst mainstream offenders, and also to dispel this public perception that MSNBC is on Team D in the same way that Fox News is on Team R. They’re not. Look, like most corporate entities, MSNBC is a die-hard member of the Green Party, and I’m obviously not talking about climate change here. Russia conspiracy was great for ratings among the key demographic of empty-nesters on the coasts with too much time on their hands.”

Ball added, “Consider this whole setup has done more damage to the Democrats’ chances of winning back the White House than anything that Trump could ever have dreamed up. Think of the time and the journalistic resources that could have been devoted to stories, I don’t know, that a broad swath of people might actually care about: health care, wages, the teachers’ movement, whether we’re going to war with Iran.”