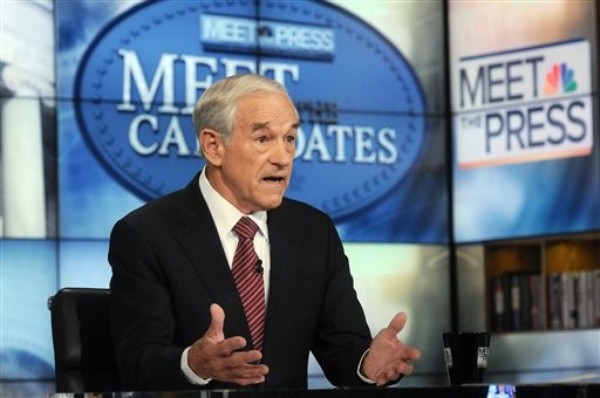 Following Tuesday’s revelation that Ron Paul is tied for first place In Iowa, it has also emerged that the Congressman is now polling in second place in New Hampshire, another of the key early voting states.

A separate poll also reveals that Paul is the only Republican candidate leading President Obama among independents.

Mitt Romney still holds a strong lead with 40 percent of the votes.

Given that Romney is so strong in New Hampshire, and has made it the focal point of his campaign, a second place finish for Paul in the primary, scheduled for January 10, would be an extremely strong showing.

The Bloomberg article on the poll also highlights:

Paul’s contact rate with voters is the only one that matches Romney’s, at 52 percent in New Hampshire. The rate at which his campaign is able to bring those likely voters into the fold is 22 percent, half that of Romney at 44 percent. “A lot of people aren’t giving him the press that he needs,” said Kristine Haase, 26, a customer service representative in rural New Hampshire. “There’s more people supporting him then they really know.”

As we reported yesterday, despite being given just 89 seconds of speaking time during Saturday’s Republican debate, Ron Paul is in a dead heat with fellow top tier candidates Cain, Romney and Gingrich for the highly influential Iowa caucuses. Paul placed second, just one percentage point behind Cain, according to another Bloomberg News poll.

The poll shows Cain at 20 percent, Paul at 19 percent, Romney at 18 percent and Gingrich at 17 percent.

Paul is undoubtedly in the strongest position going into the race, because his support is “more solidified than his rivals,” a key factor given that 60 per cent of respondents in the poll said they could still be persuaded to change their vote.

In another newly released poll, from Public Policy Polling, Paul leads President Obama 48 to 39 percent among independent voters in a hypothetical match up.

The poll also indicates that Paul is the only GOP candidate to better Obama where independent voters are concerned.

“This is yet another poll that clearly shows how competitive Ron Paul is against the sitting President,” said Ron Paul 2012 National Campaign Chairman Jesse Benton. “Dr. Paul is making strides not just among Republicans, but independent voters as well. This broad base of increasing support proves that the American people are looking for conviction instead of the typical status quo rhetoric being offered by establishment candidates.”

Paul’s campaign team have been pushing hard in the early states, setting aside a $2 million advertising buy, while the Congressman has made many visits to the states over the past few months.

Federal Elections Commission data filed in mid-October shows that Paul has received over $77,000 in contributions from Iowa so far this election cycle, a full $10,000 more than Mitt Romney.
Indeed, the only candidate to have raised more in Iowa is the incumbent President, who has hit almost $200,000 in contributions.

Paul sits well ahead of the rest of the GOP field, having raised more than double the contributions of his next closet rival – Michelle Bachmann.

In August Paul came a close second in the Iowa GOP straw poll, capturing a commanding 44% of the over 6000 votes cast.

The tussle for New Hampshire may ultimately be decided by funding. While Romney has the distinct advantage, Paul raised $8 million in the 3rd Quarter, $5 million more than Herman Cain.

The Congressman himself has said that he feels he needs to win one of the three early primaries and place second in one of them for his campaign to continue with momentum.

“I would be disappointed with third.” Paul recently told Fox News, adding “If I come in third I’m still alive, but I think I better do first or second in a couple of those. I have to do well in January.”

On Tuesday, Ron Paul appeared on CNBC’s The Kudlow Report to discuss, amongst other things, his recent strong showing in the latest poll out of Iowa.