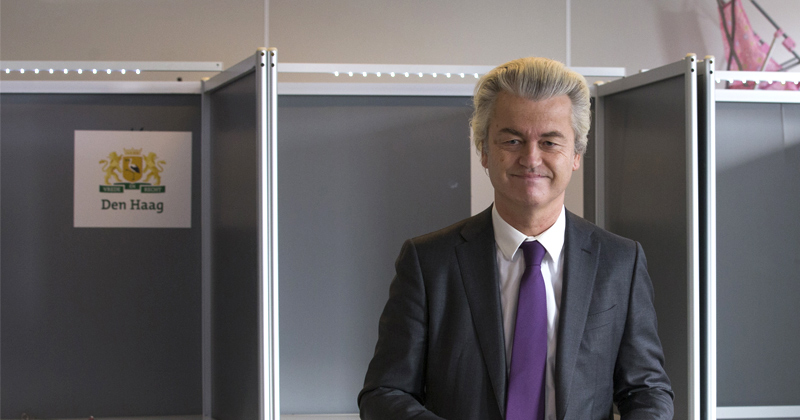 Following the Brexit referendum, the election of Donald Trump and the fall of the globalist prime minister of Italy, four critical elections scheduled for 2017 could further erode the power of the global elite.

The right-wing populist Party for Freedom (PVV) has surged in recent polls and is running neck-and-neck with Prime Minister Mark Rutte’s People’s Party for Freedom and Democracy (VVD). The two parties were once part of a coalition government, but the PVV withdrew following opposition to austerity measures passed in the aftermath of the 2008 financial crisis. The VVD currently governs in a coalition with the left-leaning Labor Party (PvdA).

Geert Wilders, the leader of the PVV, has pledged to hold a referendum on the Netherlands’ continued membership in the EU should his party win the general election in March. He has also referred to the massive stream of migrants entering Europe as a “Trojan horse” and blamed the Western European political elite for a spat of terror attacks by Islamic migrants.

Wilders was charged with hate speech, and convicted of inciting discrimination, for suggesting the Netherlands should admit fewer Moroccan refugees in response to increasing crime in Dutch cities and a perceived loss of a cohesive Dutch national identity.

There is concern that other Dutch political parties will refuse to join a government with the PVV and attempt to form a grand coalition government to shut Wilders out of power should the PVV maintain its lead. It is likely that such a government would be ineffective and unstable, a serious concern for pro-EU globalists at a time when other populist parties are surging across Europe.

Following the United Kingdom’s transfer of sovereignty over Hong Kong to China in 1997, the territory has been governed under the framework of “one country, two systems” by a Chief Executive selected by a 1,200-member Election Committee appointed by Beijing.

Pan-democracy forces have long argued for the full implementation of Hong Kong Basic Law Article 45, which calls for the process of selecting the Chief Executive to eventually be decided by universal suffrage rather than by the Election Committee.

The Standing Committee of the National People’s Congress (NPCSC) attempted to impose the standard that “the Chief Executive be someone who loves the country and loves Hong Kong,” and be nominated by a nominating committee.

In response to fears that the proposed requirements would give the Communist Chinese government the ability to disqualify candidates they deemed too supportive of democracy or independence, pan-democratic activists launched a 79-day occupy movement that came to be known as the Umbrella Revolution. The requirements were eventually rejected by the Hong Kong Legislative Council.

French Presidential Election – April 23 (First Round), May 7 (Second Round)

Facing an electorate angry over a stagnant economy, high unemployment, and an open-door migrant policy that has resulted in numerous terrorist attacks across France, socialist President Francois Hollande announced he would not seek reelection, leaving two right-leaning candidates in the best position to succeed him.

Fillon, a socially conservative Catholic, has pledged to reverse Hollande’s migrant policy, cut the size of the French bureaucracy, forge closer ties with Russia and promote a unified national identity. Though skeptical of some policies imposed by the EU, he has not endorsed a French withdrawal from the globalist body.

Fillon’s likely opponent in the second round of voting, Marine Le Pen of the National Front, has pledged a Brexit-style referendum on continued EU membership, as well as an end to the French government’s unfettered acceptance of migrants.

A victory by Le Pen would deal a near-death blow to the European Union, energize populist parties across Europe and leave Germany as the only major power with a leader advocating a unified EU.

German Chancellor Angela Merkel announced her campaign for a fourth term as Chancellor, a position she has held since 2005. While she is still popular among many Germans, her Christian Democratic Union (CDU) has seen its poll numbers decline in response to rising crime and terrorism resulting from Merkel’s open-door migrant policy that has seen over one million people enter Germany.

The left-leaning Social Democratic Party (SPD) under Sigmar Gabriel has failed to capitalize on Merkel’s vulnerability, and trails in polls by over 10%. The SPD currently governs in a grand coalition with Merkel’s CDU, with Gabriel currently serving as Vice-Chancellor of Germany.

The Alternative for Germany (AfD), a right-leaning populist party skeptical of the European Union, upset Merkel’s party in local elections in her home state of Mecklenburg-Vorpommern last September, knocking the CDU to third place while the Social Democrats held the most votes.

In a desperate bid to co-opt elements of the populist movement to remain in power, Merkel called for a burka ban in Germany “wherever that is legally possible.”

A defeat for Merkel, the last major head of state advocating a unified EU, would deal a mortal wound to the globalist body and its allies.