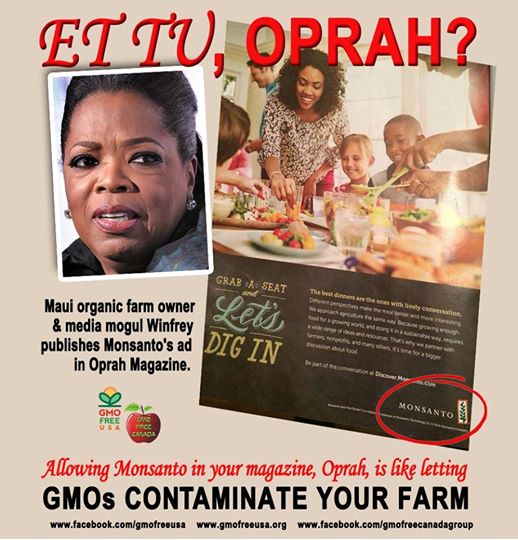 Maybe the Food Network should change their name to the Poison Café  – after all, they are helping Monsanto with their PR campaign by airing commercials with the same message as their Prop 37 No to GMO Labeling Campaign. The same Monsanto ads appear in their magazine. Its time to unsubscribe from a Network that tries to sell GE seed and glyphosate through slick ads from one of the most hated companies in the world.

Similar to the advertisement that Oprah published in her magazine for Monsanto, the Food Network is running an ad showing a happy family gathered around a table passing food with happy smiles, as well as other propaganda trying to dismiss their Round Up Ready chemicals. The TV campaign is called “Food is Love.”

Say it with me – Monsanto doesn’t make food! They make chemicals like Round Up and Bt toxins, but certainly not food. Monsanto has created chemicals like Round Up (an herbicide), Agent Orange (used as a part of the United States’ ‘herbicidal warfare program), DDT (banned in 1972, DDT has been linked to damaging the liver), Dioxin (more very toxic chemicals), and much more. All of these things are the antitheses of healthful, healing food.

If you’d like to express your displeasure with the Food Network, you can do it in several ways. You can post a message at their Facebook page, leave them a voicemail at 865.560.3663, write a review for their corporate office, or simply unsubscribe to the Food Network Magazine. Polls show that Americans rank GMOs as a top health issue in 2015, so don’t think that voicing your opinion to this issue is abnormal.

In the meantime, you can watch another commercial spoof of what we all really think of Monsanto, and reverse the propaganda.