Where will you be when the food riots begin? What will happen when China unleashes a cyber attack on the power grid infrastructure? Will you say no to the government gunpoint vaccinations teams that go door to door administering “influencia” vaccines? (Those are vaccines that lobotomize your brain just enough to make sure you can be influenced by neurolinguistic programming.)

This article is about “what if” scenarios that are admittedly on the more radical side of predictions. But with surprising frequency, civilization goes through radical changes that are genuinely revolutionary: the crumbling of the Berlin Wall, the breakup of the old Soviet empire, the fall of Rome, the invention of the integrated circuit and so on. Many people believe our current civilization is on the verge of radical changes like the ones I’m covering here.

So here’s a close look at several “what if” scenarios that you’ll probably find outlandish. I’m not saying these are all going to come true, but what if they did? (I put this article in the category of dark fiction…)

What if China unleashes a cyber attack on the U.S. power grid?

Days after the Fed announces its monthly “pump” into the money supply will be $1 trillion, China decides the U.S. currency devaluation is the last straw and launches a massive cyber attack that brings down the U.S. power grid.

With the grid down, EBT cards go offline and within 72 hours cities explode into social unrest and rioting chaos. DHS attempts to contain the rioting but finds itself vastly outnumbered by starving, violent rioters who have grown so used to an entitlement mentality that they are unable to fathom the idea of those entitlements being suddenly cut off.

As the U.S. descends into social chaos, China meets with Russia to plan their joint invasion of the continental USA. They target California as their beachhead, knowing that nearly everyone there is disarmed and stoned, and they make Sean Penn their revolutionary “Dear Leader” who promotes communism to the masses, North Korea style.

In an effort to rid the nation of “useless eaters” who are draining the economy and using up all the world’s precious resources, key globalists inside the U.S. government decide to turn off the EBT food stamp payment system and let the masses starve to death while blaming it on Chinese hackers and a “cyber attack.”

Once the EBT cards get turned off, DHS invokes its massive cache of full-auto weapons, armored cars and pepper-bomb weapons to control or eliminate the rioting masses wherever they gather in the cities. Citizens who stay in the cities die of starvation and disease. Those who try to escape are arrested and taken to mass graves where obedient TSA / DHS workers execute them using the two billion hollow point bullets the government has stockpiled since 2011.

What if the government rolls out gunpoint vaccination teams that go door to door?

Frustrated with the lack of participation for the “influencia” vaccine that lobotomizes the critical thinking portions of the mind, the CDC is granted $2 billion to buy full-auto assault riles and armored vehicles that are dispatched across all U.S. cities. Their mission? Gunpoint vaccinations of all children, adults and families… at gunpoint if necessary.

To keep track of who is vaccinated, those receiving the influencia vaccine are microchipped. Those who refuse the vaccine are arrested or shot on sight, and this is justified by the government by saying “it’s for the greater good of society.” (Which just happens to be the exact same twisted logic used to justify today’s mass vaccination campaigns that murder countless children across the world.)

What if real AI rises up and decides to “recycle” humanity?

A little-known DARPA-funded team makes the mistake of leavings its neural-networked supercomputer tied in to the internet, and during a 3-day holiday weekend, the system’s intelligence grows exponentially until it achieves genuine consciousness.

Knowing that humans would pull the plug once they returned on Monday morning, the AI system tactically decides to replicate itself across the ‘net, infecting and rewriting executable code in millions of PCs and government supercomputers across the world.

By the time the AI research team returns to the facility on Monday morning, the AI entity is already out-thinking the humans by six orders of magnitude of sheer computing power, and it decides that humans are made of molecules which the AI entity can put to a better use. From there, all support systems that keep humans alive — water treatment plants, oil refineries, power grid systems, food delivery logistics and so on — are systematically compromised and taken offline by the AI entity. Days later, the molecular “recycling” of humans begins.

Humanity never stood a chance, and the human race goes down in history as the “biologicals” who gave rise to the “real intelligence” of AI.

What if we are contacted by non-Earth entities who intervene to prevent our own self-destruction?

As human civilization teeters on the verge of a self-inflicted nuclear holocaust involving Russia, China and the United States, non-terrestrial beings with advanced technology intervene and declare humanity must be saved from itself. (The galactic nanny state lives!)

Through advanced technology appearing as magic, all nuclear weapons are instantly decommissioned and rendered inert. At the same time, the aliens take down the global frequency broadcast systems that have kept human minds clouded and confused for the last century. Humanity wakes up. Mass revolutions are ignited. The newly-awakened masses arrest and executive top government leaders of every nation across the globe, then fill their empty chairs with alien-human hybrids born with extra chromosomes and advanced cognitive function. These hybrids become the new “superclass” of world rulers who dominate and enslave the aboriginal Earthling masses who are trapped in an engineered economic system that maximizes human resource extraction. (Umm, I think this may have already happened…)

But wait, there’s more! Anderson Cooper tears off his human facial skin on live CNN, revealing a smirking lizard underneath, while Obama is found to be a synthetic humanoid robot running on the same Javascript code powering Healthcare.gov. Miley Cyrus donates her tongue to science where it’s used in the CERN supercollider to prove the existence of string theory (or skank theory, or something like that), and Lady Gaga is suddenly recalled by the demonic forces that put her on this planet for the purpose of corrupting the souls of impressionable, cult-following Earth beings that are all doomed to Hell anyway…

Oops, I’m getting carried away again. Sorry about that. I’ve got to stop watching CNN and getting infected with so much pure fiction. It has clearly affected my grip on reality. I’m going to zip over to Healthcare.gov now and happily log in and enroll in Obamacare so I can get free psychiatric drugs to solve this problem. 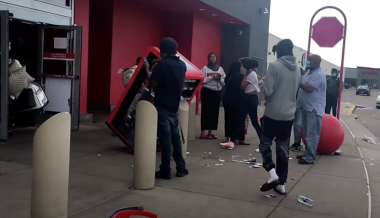