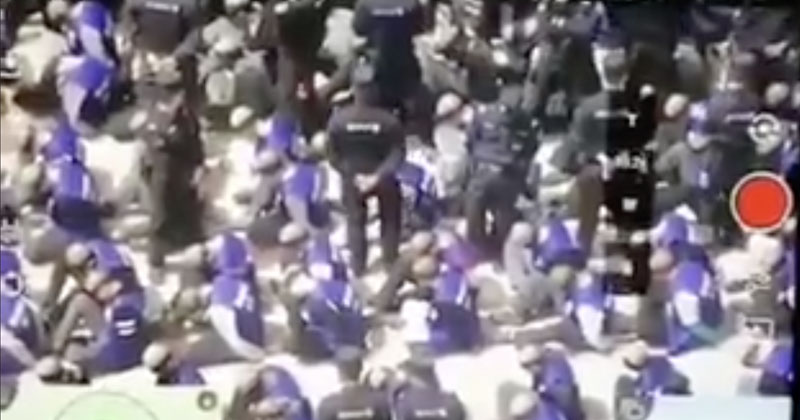 Leaked online footage that appears to show hundreds of blindfolded and shackled prisoners in a Muslim-dominant region of China is believed to be authentic, according to a European security source.

The detainees are thought to be Uighur Muslims, a large minority group within China.

“We’ve examined the footage and believe it to be genuine,” the source told Sky News, adding that it was likely taken this year.

4.6 million Chinese uyghur Muslims are locked up in concentration camps and their organs are being sold online. Their only crime is being Muslim. Why is nobody talking about this? They are forced to be athiests and Muslim women are forced to be married to ugly atheist men. Smh pic.twitter.com/MbGQGblvwp

“It shows up to 600 prisoners being moved; they’re shackled together, have shaved heads, are blindfolded and have their hands locked behind their backs. This is typical of the way the Chinese move this type of prisoner.”

The footage, posted anonymously on Tuesday on Twitter and YouTube, shows lines of men, heads shaved, hands bound behind their back, sitting in lines on the floor or being moved by guards at a station in the city of Korla in Xinjiang, northwest China.

United Nations experts have spoken of “credible reports” of China holding one million Uighurs and other Muslim minorities at mass detention camps in Xinjiang.

China insists the alleged detention sites are “vocational” centres aimed at training and skills development. In a report earlier this year to counter criticism, the government said it had arrested nearly 13,000 people it described as “terrorists” and had broken up hundreds of “terrorist gangs” in Xinjiang since 2014.

During the 1980s and 90s, Maoist China had been using re-education camps against political dissidents, usually blindfolding and shackling them before marching them out by the hundreds for their execution and subsequent organ harvesting. 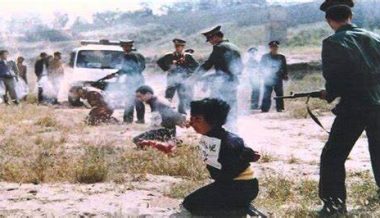 “The Xinjiang region of far-western China has been a hotbed of violence for centuries,” Listverse reported in July. “In 1775, the Qing Empire, an ethnic Manchu dynasty that ruled all of China from Beijing, began the liquidation of the Dzungar people, or ethnic Mongols who lived in Xinjiang, following a rebellion against Qing rule. In total, between 480,000 and 500,000 Dzungars, or 80 percent of their population, were killed by Qing soldiers and their allies. The remaining 20 percent were forced into slavery.” 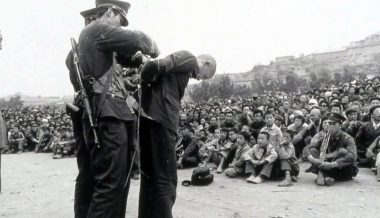 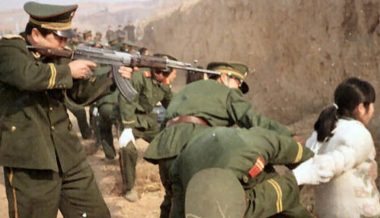 600 people being marched outside in blindfolds and shackles, as the video shows, is starkly similar to how Maoist China rounded up prisoners for execution.

It’s not outside the realm of possibility that the same Maoist genocidal system is being implemented here, as history has shown the fate of these groups within China time and time again.

Don’t miss this special announcement by the Chinese government: