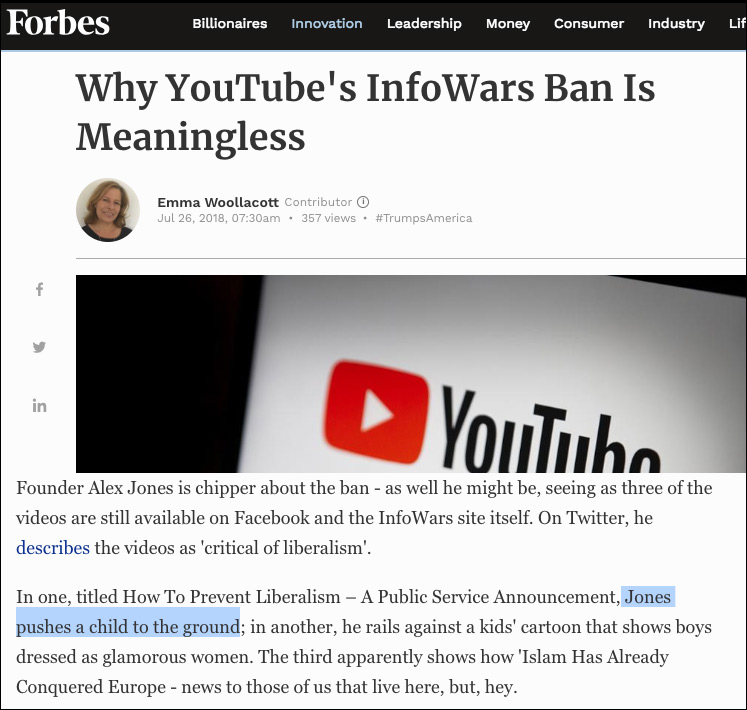 The mainstream media is tripping over itself inventing lies to get Infowars banned on social media.

But a Forbes contributor took the cake Thursday by inventing the claim that one of Infowars’ banned YouTube videos features Alex Jones assaulting a child.

In an article entitled, “Why YouTube’s Infowars Ban is Meaningless,” Emma Woollacott explains Infowars’ YouTube strikes at length with various bits of misinformation strewn throughout.

The seemingly well-researched piece is comprehensive, were it not for the fact that Woollacott completely invents an imaginary assault that never took place.

Forbes is now just outright making shit up, claiming we should be banned from YouTube because in one video, Alex "Jones pushes a child to the ground."

No such video exists.

Describing one banned video, Woollacott claims Jones is taped pushing a child to the ground.

Watch the video in question below, uploaded to our own servers:

On the other hand, CNN correctly described the contents of the video:

On Thursday, Alex Jones reported his lawyers had informed him he’s being summoned to the Travis County Courthouse in regards to the false claim made in Woollacott’s article.

Forbes’ fabrication of a non-existent assault is exemplary of the lies being promoted by the establishment media, which is desperate to rid itself of an alternative media outlet platform unbeholden to corporate interests.

Update: After an email from Infowars, Woollacott corrected her article to reflect that Alex Jones was not featured in the video. An update clarifying the error was added to Woollacott’s article.