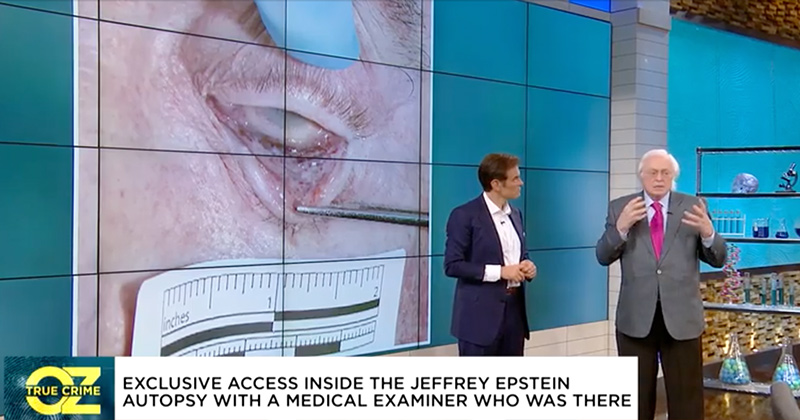 “In a hanging, the arteries and the blood vessels, the veins, are both clogged off and the person is pale. The face is pale,” Baden explained.

Continuing, Baden said, “With a manual strangulation, there’s a backup of a pressure and the little capillaries can rupture and they’re best seen in the eye.”

“The blood settles after we die. The so-called lividity, if you’re hanging, the lividity is on the lower part on the legs. These would be like maroon/purple, front and back and they aren’t,” Baden told Dr. Oz.

Dr. Baden, hired by Jeffrey Epstein’s brother Mark, has been on record claiming evidence in the Epstein death points towards murder rather than a suicide.

Meanwhile, more information about Epstein’s pedophile/blackmail empire continues to come to light as the U.S. Virgin Islands recently filed a complaint against the Epstein estate alleging sex trafficking, rape, sexual assault and the kidnapping of underage girls and young women.