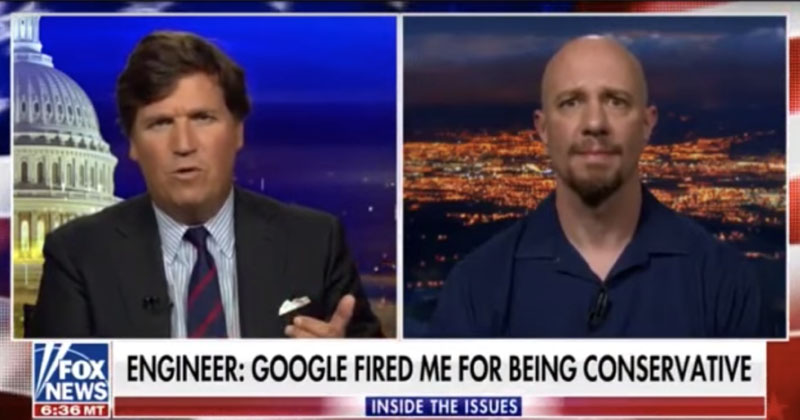 Former Google engineer warned Friday that Google was rife with political bias and is determined to prevent President Trump from getting reelected in the 2020 election.

During his appearance on “Tucker Carlson Tonight,” Kevin Cernekee claimed he was fired from Google for his conservative views and will exert their anti-Trump bias during the presidential election.

“It’s highly ideological. You can see bias at every level at the organization,” Cernekee told Carlson. “One thing that I noticed that just handling routine issues is plagued with bias. Like they will get a report, an email with a liberal reporter complaining about something and they will jump on it and they will fix the issue very, very quickly.”

But when it comes to errors pertaining to conservatives, Google will slow-walk fixing the problem for months, Cernekee said.

“In contrast, one thing that I saw when I worked there was if you do a Google search for ‘Crippled America,’ which is Donald Trump’s book you would get results that would show ‘Mein Kampf’ instead of ‘Crippled America,'” he said.

“And I reported that I filed a bug, I escalated it, I tried to run it up the chain. They took nine months to fix that bug. They just stalled at every opportunity. They assigned it to people who no longer work there. They made every excuse in the book to avoid taking down something that made Donald Trump look bad. And I saw a number of incidents just like that.”

When asked by Carlson if he thinks Google will use its bias to meddle in the 2020 election, Cernekee responded, “I do believe so.”

“I think that’s a major threat,” he continued. “They have openly stated that they think 2016 was a mistake. They thought Trump should have lost in 2016. They really want Trump to lose in 2020. That’s their agenda. They have very biased people running every level of the company. They have quite a bit of control over the political process. That’s something we should really worry about.”

James O’Keefe has once again brought another whistleblower from inside Google to expose blatant election manipulation.