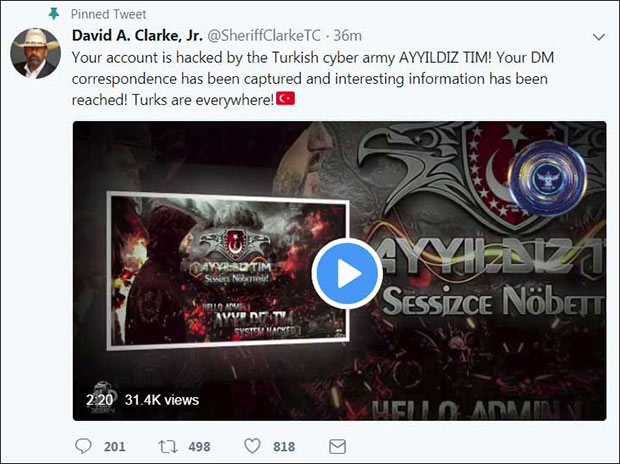 In a now-deleted tweet, the hackers, known as “Ayyıldız Tim,” or “Star and Crescent Team,” claimed to have accessed Clarke’s private messages.

“Your account is hacked by the Turkish cyber army AYYILDIZ TIM! Your DM correspondence has been captured and interesting information has been reached! Turks are everywhere!” said the tweet. 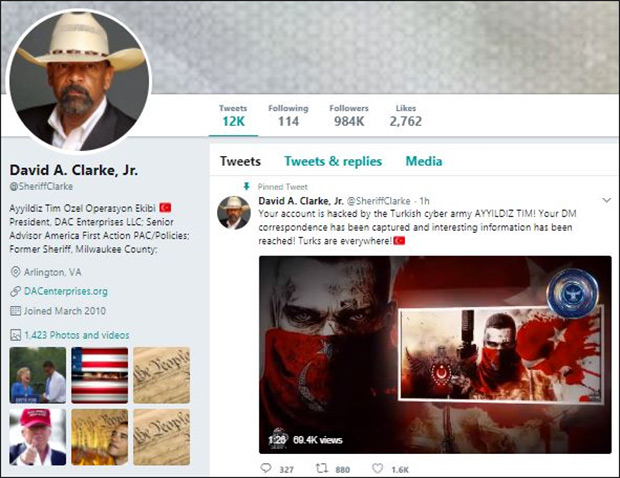 The hackers’ slogan, “Ayyildiz Tim Ozel Operasyon Ekibi,” was also placed in Clarke’s Twitter bio next to a small image of the Turkish flag.

Approximately two hours after the tweet appeared, Clarke’s page was returned to normal. Neither Clarke or Twitter has commented on the incident thus far.

The former sheriff is the latest political figure to be hit by the Turkish hackers, who appear to focus primarily on prominent conservatives.

“Sarah Carter’s Twitter account (SaraCarterDC) has been compromised. Tweets as of 1/22 are not those of Sara Carter. We’re working on resolving this issue,” a message on Carter’s website read following the incident.

In a statement on Facebook, Carter stated her Twitter account had been hacked from Istanbul, Turkey, and advised her followers not to open links sent over direct message.

“Please do not click on any links sent to any followers in the DM. I still don’t have control of my account,” Carter wrote.

The hacks of Clarke and Carter come one week after the Turkish crew successfully infiltrated the accounts of former Fox News hosts Eric Bolling and Greta Van Susteren.

Both Greta Van Susteren and Eric Bolling have been hacked

The hackers are now tweeting pictures of Eric Bolling’s DM’s. I have blacked out the DM’s to respect his privacy (though it won’t do much). pic.twitter.com/6WwijU0RzG

In the case of Van Susteren, the hackers used her account to send a direct message to President Donald Trump requesting he share a pro-Turkey video.

3. The connection Greta and Eric Bolling have in this case is they're both followed by @realDonaldTrump – the hackers are now sending direct messages to President Trump from Greta's account. pic.twitter.com/P5jPS1MPus

While it remains unclear how the hackers infiltrated each account, a screenshot posted to Twitter shows the group used Carter’s account to send phishing links to reporters at NBC and CNN.

Does anybody know what this link is? A fringe-Right journalist with whom I have never spoken sent it to me. It asks for my Twitter log-in and password. pic.twitter.com/CL3BvUBLD2

Analysis of the hackers’ phishing page shows the group has set up numerous others with references to The New York Times, The Guardian and Fox News in the URL.