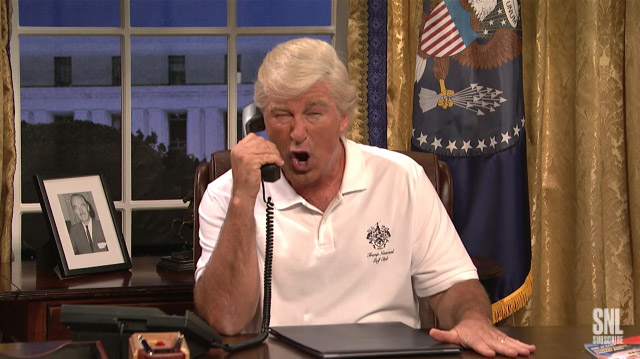 In an interview with The New York Daily News, Schneider indicated the NBC late night show has become unfunny by “showing their hand” politically with its innumerable skits portraying the 45th US President in a negative light.

“The fun of ‘Saturday Night Live’ was always you never knew which way they leaned politically,” Schneider said. “You kind of assumed they would lean more left and liberal, but now the cat’s out of the bag they are completely against Trump, which I think makes it less interesting because you know the direction the piece is going.”

The actor recalled his former co-worker Dana Carvey would portray ex-President George Bush in a mocking, but respectable manner; however, actor Alec Baldwin’s impression of President Trump is filled with hate.

“Carvey played it respectfully,” Schneider said. “To me, the genius of Dana Carvey was Dana always had empathy for the people he played, and Alec Baldwin has nothing but a fuming, seething anger toward the person he plays.”

“Alec Baldwin is a brilliant actor… he’s not a comedian,” Schneider added.

The joke is spoiled, Schneider says, because Baldwin openly discusses his hatred for Trump.

“I don’t find his impression to be comical,” said Schneider. “Because, like I said, I know the way his politics lean and it spoils any surprise. There’s no possible surprise. He so clearly hates the man he’s playing.”

Schneider, a former Democrat who now identifies as an independent, did not say he’s 100% on board with Trump’s policies – especially on immigration – but he’s definitely not on board with the political correctness creeping in on popular culture.

“Literally if you don’t go the party line — you’re out. There’s a real ugliness to it,” Schneider highlighted, echoing sentiments made by comedian Tim Allen on the Jimmy Kimmel show last year.

The actor, who now has a show on Netflix, said he believes it’s counterproductive to attempt to make the president nervous at his job.

“Nothing good can come from making Trump nervous,” he said about his Home Alone 2 co-star. “It’s like asking Bill Cosby to top off your drink.”

Schneider says during filming of Home Alone 2, Trump offered him a free room at his Plaza Hotel where the movie was filmed, and “was very generous.”

“[Trump] was nice enough to give me a room. He gave me a room for free, so I could sleep between shots,” Schneider said. “He was very generous and nice and has been nice every time I saw him. He told me hated me, but he was kind of joking because I made fun of him.”

The comedian’s anti-SJW comments come as others in the entertainment industry, such as Kanye West, shake the status quo by revealing their admiration for the 45th president.