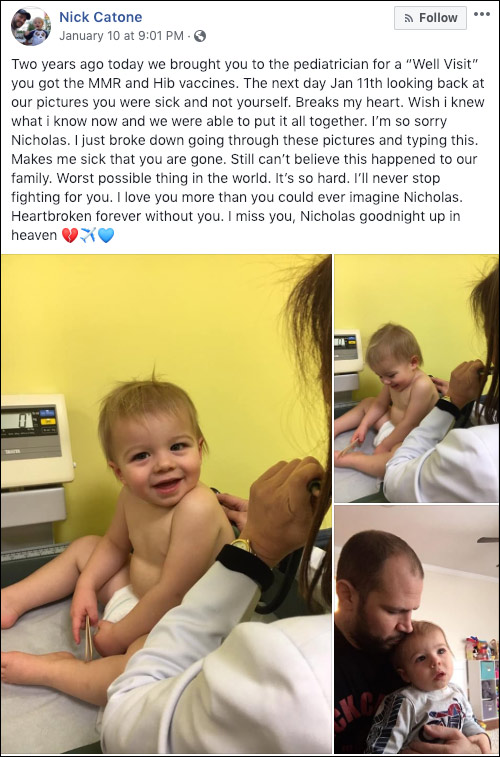 UFC fighter Nick Catone last week mourned his son on the 2nd anniversary of his death following a round of vaccine injections.

In a Facebook post, Catone recalled how his 20-month-old son Nicholas passed away on January 12, 2017, mere days after visiting the pediatrician for a “well visit” where he received MMR and Hib (Haemophilus influenzae type B) vaccines.

“The next day Jan 11th looking back at our pictures you were sick and not yourself,” writes Catone. “Breaks my heart. Wish i knew what i know now and we were able to put it all together. I’m so sorry Nicholas. I just broke down going through these pictures and typing this. Makes me sick that you are gone. Still can’t believe this happened to our family. Worst possible thing in the world. It’s so hard. I’ll never stop fighting for you. I love you more than you could ever imagine Nicholas. Heartbroken forever without you. I miss you, Nicholas goodnight up in heaven”.

Photos shared show a lively Nicholas sitting on an examination room table full of smiles, while another presumably after vaccines features Nicholas with a vacant stare, apparently suffering neurological trauma. 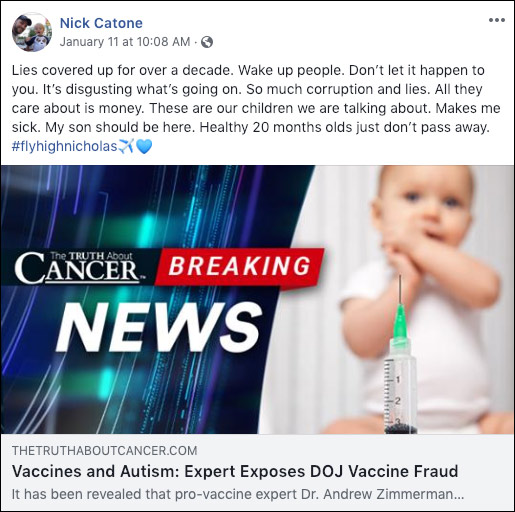 In a subsequent post linking to an article regarding vaccines and their alleged ties to autism, it’s apparent Catone blames the vaccines for his son’s death.

“Wake up people. Don’t let it happen to you,” Catone warns his followers. “It’s disgusting what’s going on. So much corruption and lies. All they care about is money. These are our children we are talking about. Makes me sick. My son should be here. Healthy 20 months olds just don’t pass away.”

Mr. Catone had not responded to Infowars’ request for comment at the time of publishing.