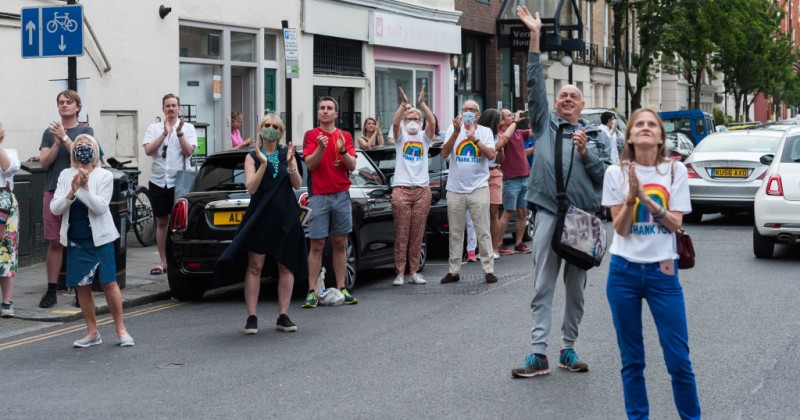 The founder of the ‘Clap For Carers’ movement, a weekly event where people in the UK applaud NHS workers, is calling for the spectacle to end because it has become too “politicised.”

“Annemarie Plas, a Dutch national living in south London, said she was “overwhelmed” by the support for the ritual, but said it was better to stop when it was at “its peak,” reports Sky News.

Plas, a yoga teacher, said, “Without getting too political, I share some of the opinions that some people have about it becoming politicised.”

“I think the narrative is starting to change and I don’t want the clap to be negative,” she added.

In reality, Plas is likely calling for an end to the event, which takes place every Thursday at 8pm, because it has begun to fizzle out and will begin to look increasingly pathetic as fewer people take part in it.

The optics of having one final big event will look far better than if the weekly clapathon was allowed to fade away.

No TV allowed during worship. pic.twitter.com/h2qr67tSid

As we previously highlighted, skeptics have pointed out that the event has turned into a bizarre kind of communal ceremony, with the NHS being deified as a religious institution.

“It reminds me a little, in its tendency to get longer and louder and almost more hysterical, of the applause after a speech by Nicolae Ceausescu or other communist despot, in which everyone in the audience had to show himself as enthusiastic and the most enthusiastic applauder, and to continue applauding as long as someone else was applauding, for to be the first to stop might be taken as a sign of disloyalty and dissent from the official line,” wrote the author.

In the United Kingdom, the National Health Service (NHS) is treated as a religious institution by many, who insist that it is the “envy of the world” and a sterling example of the supremacy of government health care.

However, a ranking of health care systems by The Lancet medical journal placed the NHS below Estonia and Slovenia, finding it to have “an especially low score for cancer care.”