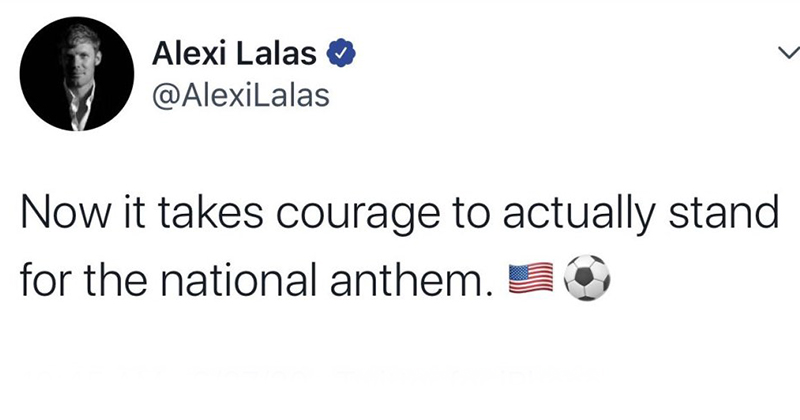 A former US soccer player working for Fox as an analyst deleted a tweet he posted saying that standing for the national anthem “takes courage.”

Alexi Lalas later also apologised for making the remark, and issued a statement clarifying that he supports those trying to bring attention to ‘the problems of police brutality and systemic racism’.

Following more than a dozen players in the National Women’s Soccer League taking a knee Saturday, Lalas wrote that “Now it takes courage to actually stand for the national anthem.”

He was immediately targeted for cancellation by the woke mob:

If this is your takeaway from the organized action by our players, you clearly haven’t been listening, Alexi. https://t.co/4WERoR6gn7

No. Colin Kaepernick and Megan Rapinoe had real courage. https://t.co/iLEj38UW8L

Can everyone keep being mean to Alexi Lalas? It’s the only thing bringing me joy.

While we’ve interacted with Alexi Lalas in the past, we cannot support or ignore his recent statements. It’s time to change our country fundamentally. Protagonist will no longer share our platform with Alexi and will be removing any appearances on our site or podcast feed.

Since Alexi Lalas is trending, it seems like the perfect time to remind people that he is a rotten anti-African xenophobe who sat behind ESPN’s commentary desk during the 2014 World Cup and claimed that no African team would make it to the round of 16. Nigeria did. He is vile. 🙅🏾‍♂️

Lalas immediately caved and issued an apology for his words:

I wrote a few more words about today… pic.twitter.com/1jDGXEEK33

Others had some keen advice for Lalas:

Here some advice: Never apologize to the Mob. Never!

You were right though. If you stand with respect for the American flag and Anthem you will likely be called a racist and not “woke”….which is ridiculous

Now, all you have to do is kiss their shoes! pic.twitter.com/NUXOtrJvvE

You coward. Bending the knee to the mob

You chickened out. I hope the paycheck was worth losing your spine. Congratulations.