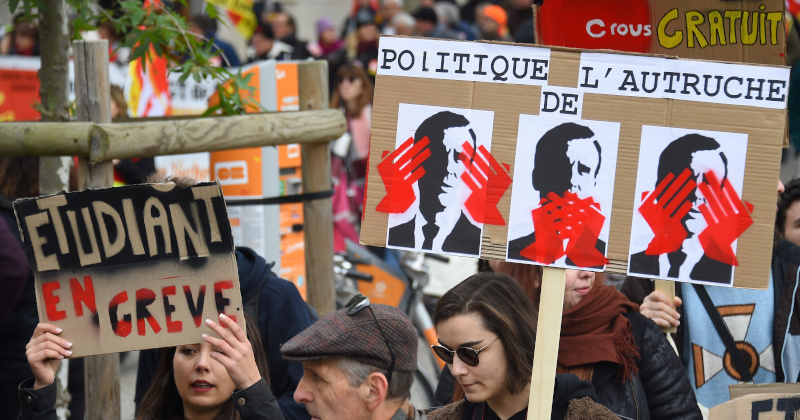 Millions of transport workers, teachers, police and other professionals have begun a general walkout in France’s biggest shutdown in years.

The strikes will be a major test of President Macron’s political strength.

A general strike in France paralyzed the country on Thursday, as workers and other professionals protest against President Emmanuel Macron’s proposed pension reforms.

The strikes follow over a year of weekly “yellow vest” protests against inequality that have rocked the country.

What services are affected?

The French government has beefed up security in the capital Paris and other major cities amid fears hardline protesters could cause trouble.

French media said the walkout could last for several days, drawing comparisons with the 1995 showdown between the government and unions that paralyzed the country for weeks.

President Macron plans to reform France’s pension system, calling it unfair and costly. He wants to introduce a single, points-based system that guarantees equal rights to every pensioner.

Macron also wants to implement a “universal” retirement system, which was one his major campaign promises. But labor unions say the proposed reforms would effectively require millions of private-sector workers to work beyond the legal retirement age of 62 in order to receive the full pension.

“The moment of truth for Macron,” wrote the Le Monde daily in its Thursday’s edition. “The next days are a decisive test for the head of state.”

The French leader wants to set the tone for the second half of his mandate, as he plans to announce more difficult reforms in the coming months.

“What we’ve got to do is shut the economy down,” Christian Grolier, a senior official from the hard-left Force Ouvriere union, told Reuters news agency. “People are spoiling for a fight.”

The “yellow vest” demonstrations, which occasionally turned violent, evolved into an anti-government uprising against Macron, whose policies are seen as favoring the rich.

The movement has since lost steam, going from tens of thousands of demonstrators to a few thousand.

TheMediapart website said: “Will the [Thursday] protests and strikes be strong enough to halt the march of reform? Everyone is holding their breath.”