Privilege has its perks. For instance, the privilege enjoyed by Max Mosely, a former barrister and president of the Fédération Internationale de l’Automobile. 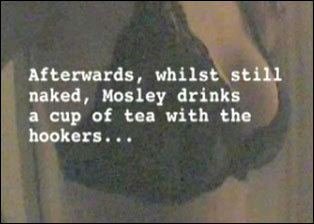 A shamed Mosley, the youngest son of Sir Oswald Mosley, former leader of the British Union of Fascists, has admitted paying five women £2,500 ($4,000) for the escapade, but said the Nazi theme reported in the tabloids was off the mark. He earlier won a lawsuit against the tabloid in France and England.

Mr. Mosley may, however, have an affinity for all things Nazi. In 1936, his father married Diana Mitford in a ceremony in Germany attended by Joseph Goebbels and Adolf Hitler. His parents were interned during the Second World War for collaborating with the Nazis.

It will be impossible for Google to remove the images from the internet as ordered by a French court. Although it can delete links from its search engine listings, it will prove virtually impossible to prevent links pointing to the images from reappearing.

Google released a statement saying in order to follow the court order it will have to engineer a software filter to find and remove new links to the naughty images.

“This is a troubling ruling with serious consequences for free expression and we will appeal it,” said Google’s associate general counsel Daphne Keller in a statement.