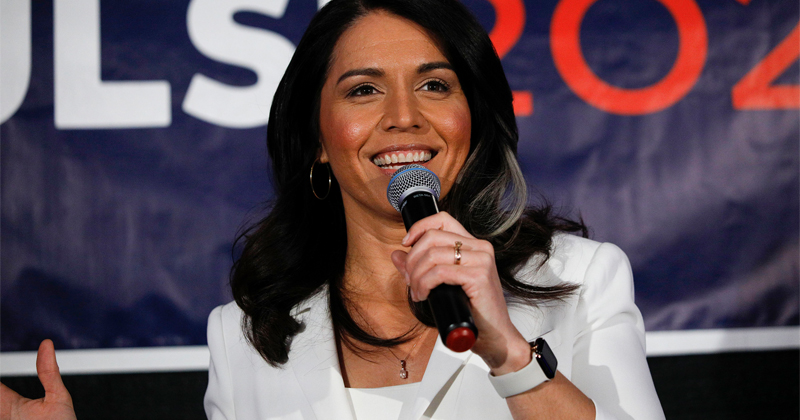 Congresswoman Tulsi Gabbard (D-Hawaii) has chosen to let Hillary Clinton get away with calling her an agent of the Kremlin, dropping the defamation lawsuit for the sake of party unity and defeating President Donald Trump.

While Gabbard and her campaign “remain certain of the action’s legal merit,” the new reality of the Covid-19 pandemic requires them to “focus their time and attention on other priorities, including defeating Donald Trump in 2020, rather than righting the wrongs here,” her attorney Dan Terzian wrote in the court filing withdrawing the lawsuit on Wednesday.

It was a far cry from the fiery tone of the original complaint, filed in January, accusing Clinton of lying “publicly, unambiguously, and with obvious malicious intent” when she claimed Gabbard was “the favorite of the Russians,” in an October 2019 interview.

While Clinton did not mention Gabbard by name, her spokesman initially responded to questions about the interview with the phrase “if the nesting doll fits,” confirming the speculation. Later, however, she tried to walk the comments back and say that she really meant Gabbard was an agent of the Republicans, not the Kremlin.

The Hawaii congresswoman mounted a maverick presidential bid, famously torpedoing the candidacy of Sen. Kamala Harris (D-California) in an early round of debates but failed to win much traction with convention delegates in the face of a relentless media campaign against her.

Gabbard suspended her campaign on March 19, citing her duties as a medical reservist in the US military, and went on to endorse Joe Biden – former vice president and long-term senator that the Democrat establishment rallied behind.

Gabbard’s withdrawal of the defamation claim against Clinton clearly represents the final stage of ‘bending the knee’ to the party, in the same vein as her former mentor – and Biden’s only real rival for the 2020 nomination – Bernie Sanders did back in April, going on to demand of his progressive followers they fall in line as well.