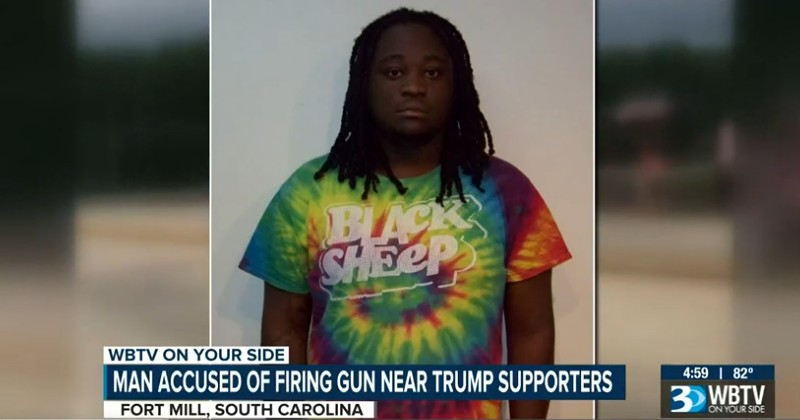 A gang of three men fired shots from their vehicle at a group of Trump supporters during a political rally in Charlotte.

The incident occurred on Monday evening in the area of I-77 and Sutton Road during a women’s organization event at which children were also present.

The group, which was holding Trump signs and American flags, said the three men “drove by more than once, making derogatory remarks and yelling obscenities at them from their vehicle.”

“The victims said as the vehicle turned from Sutton Rd on to the ramp to northbound I-77, the driver of the vehicle kept yelling, then put his arm out the window while holding what appeared to be a handgun,” reports WBTV.

A police officer was able to follow the vehicle onto the highway before finding it abandoned.

Two of the males were released without charges but the driver, 23-year-old Marquise Damarius Asomani, was taken into custody and is being charged with six counts of assault and battery of a high and aggravated nature and one count each of unlawful carrying of a pistol, pointing and presenting firearms at a person and possession of a firearm during a violent crime.

“It was ridiculous. There were kids everywhere,” says Ostrowski. “They drove by really slow and saw everybody, so they knew exactly who was there.”

Lindsey Portugal, one of the rally organizers, said, “I think it’s sad honestly that we’re showing support for the president and you have to be nervous about somebody coming and doing this.”

As we highlighted yesterday, a former city councilman who had a Trump/Pence sign in his yard was murdered by a burglar in Florida. Police say the killing was “random.”