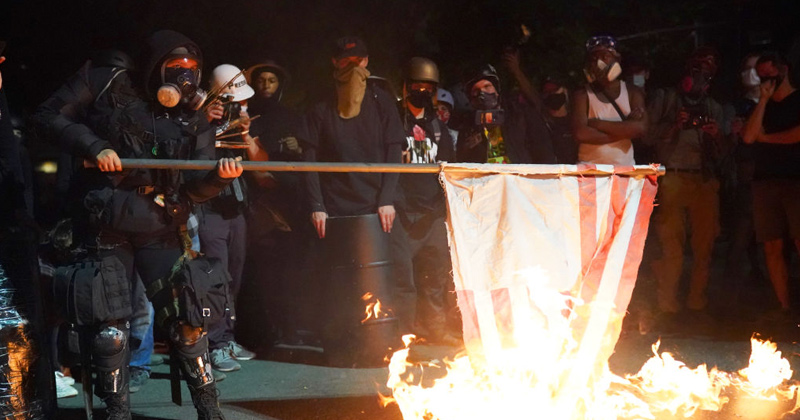 Joe Biden’s campaign has come out swinging against President Trump after new polls revealed him edging Biden in key battleground states, accusing him of “trying to incite violence” with his attempts to quell the left-wing looting and rioting.

Biden deputy campaign manager Kate Bedingfield appeared on “Fox News Sunday” to make the case that Trump is responsible for the widespread inner city violence sparked by Black Lives Matter because he “failed to lead on the coronavirus.”

“Part of why we are in the state of chaos that we’re in in this country is because Donald Trump has failed to lead on the coronavirus, he failed to take it seriously from the outset and he’s failed to be a uniter, he’s failed to lead,” Bedingfield said. “Trump has been trying to incite violence this entire summer.”

“He’s had every opportunity to speak as a leader to this nation, to speak to people who are in trouble but also people who are looking around and are afraid, who see chaos,” she added. “He has encouraged his supporters to go out, to be aggressive.”

This is verifiably false.

President Trump has been consistently calling for blue-city mayors and governors to request federal assistance to quell the left-wing violence since the rioting first broke out in May following the death of George Floyd in Minneapolis.

But the Democrat leaders have roundly rejected Trump’s advice, defending the looting and rioting as “peaceful protests” over “police brutality” and “racial inequality.”

In fact, it’s the Democrats and media who have been encouraging the widespread anarchic violence over the summer.

Recently, Rep. Ayanna Pressley (D-Mass.) encouraged the far-left base to maintain “unrest in the streets”.

And in June, vice presidential candidate Kamala Harris said the rioters “should not” and “would not” stop, even after Election Day.

And after Antifa drove out police and set up an “autonomous zone” in downtown Seattle earlier this summer, Mayor Jenny Durkan dismissed the insurrection as a potential “summer of love” — the “CHAZ” zone was dismantled after two teens were shot dead.

But since CNN’s Don Lemon warned last week that internal polling showed the public souring on Democrats over their refusal to condemn or even acknowledge the left-wing violence, Democrats and Joe Biden changed their tune, but are now blaming the violence on Trump.

WATCH: Don Lemon admits that Joe Biden is too weak to stand up to the rioters and looters.

"I think Democrats are ignoring this problem or hoping that it will go away…Joe Biden may be afraid to do it…He's got to address it. He's got to come out and talk about it." pic.twitter.com/JdUQE7yjW4

Since the Republican National Convention last week, Trump has gained a lead over Biden in key battleground states like Michigan, Wisconsin, Florida, and Pennsylvania.

Owen Shroyer guest hosts The Alex Jones Show to showcase the exodus of former Democrats joining the Republicans and vowing to vote for Donald Trump in the 2020 Presidential Election.