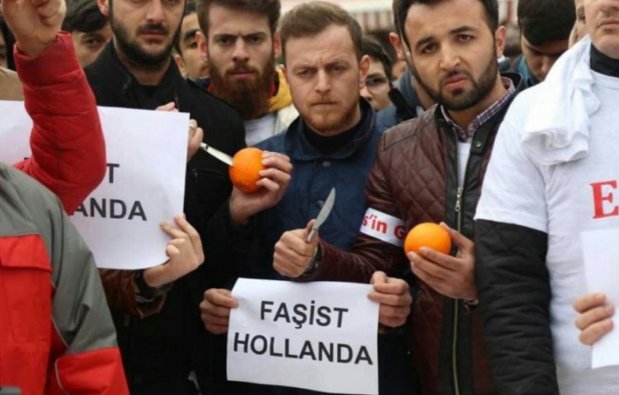 Geert Wilders is all guns blazing in the finals days before critical elections in the Netherlands that will serve as a referendum on the Islamization of the country – and Turkey’s attempt to bully its way into the European Union.

On the heels of a violent Turkish uprising that started in Rotterdam this weekend, and was further exacerbated and encouraged by Turkey’s president Recep Erdogan, Wilders called for Turkey’s ambassador and staff to be ejected from Holland.

Erdogan repeats we are nazis + fascists. He insults Dutch police. No de-escalation. Expel Turkish Ambassador to NL and entire staff!

“Erdogan repeats we are nazis + fascists. He insults Dutch police. No de-escalation. Expel Turkish Ambassador to NL and entire staff!” he wrote.

The riots are in retaliation to the Dutch government blocking Turkish officials from traveling to the Netherlands to rally and whip up support for an April referendum in Turkey that many believe could turn the already-authoritarian Erdogan into a full-blown dictator.

Some 400,000 Turks already live in the Netherlands, and many of them turned out to rage in the streets of Rotterdam, where they were met by riot police in a scene that could continue to play out through election week – especially if Wilders’ Party For Freedom (PVV) were to win.

Erdogan flagrantly fueled the fires of his people on the ground, accusing the Dutch of “nazism” and demanding international sanctions.

“I thought nazism was over, but I was wrong. In fact, nazism is alive in the west,” Erdogan declared at a rally in Istanbul.

“If you are willing to sacrifice Turkish-Dutch relations, you will pay for it,” he also threatened. “What’s more, we’re not done yet.”

“They will pay the price of treating my citizens, my foreign minister… in an impudent way.”

Turkish Islamofascists in Holland have responded in kind to their true leader, defacing PVV party member’s houses with the words “fascist” and stabbing oranges intended to represent Dutch society, while holding signs accusing the Dutch of being “fascist.”

Wilders’ tweet echoes sentiments he unleashed in a blistering video from 2015, aimed directly at the Turkish regime and its people, that has found new life and relevance on social media and alternative press outlets during this explosive and rapid erosion of Dutch-Turkish relations on the cusp of the election.

Today, I have a message for the people of Turkey:

Your government is fooling you into believing that one day, you will become a member of the European Union.

You are no Europeans, and you will never be.

An Islamic state like Turkey does not belong to Europe.

All the values Europe stands for – freedom, democracy, human rights – are incompatible with Islam.

We do not want visa-free travel for Turks coming to Europe, either. European governments that agree with this will be voted out of office by the people.

Turkey voted for Erdogan, a dangerous Islamist who raises the flag of Islam.

We do not want more, but less Islam.

So Turkey, stay away from us. You are not welcome here.

Congressman Steve King (R-Iowa) tweeted his support of Wilders and Dutch nationalists, saying, “Wilders understands that culture and demographics are our destiny. We can’t restore our civilization with somebody else’s babies.”

Wilders understands that culture and demographics are our destiny. We can't restore our civilization with somebody else's babies. https://t.co/4nxLipafWO

This, of course, set the globalist media on fire.

Rep. Steve King doubles down on his controversial tweet: "I meant exactly what I said" https://t.co/6OZtrfIwim https://t.co/4SYoAAiGtQ

The Netherlands will hold their elections this Wednesday, March 15, and the world will be watching with baited breath as the crumbling European Union could be dealt a veritable death blow with a win by the ‘Dutch Donald Trump’ and his passionate supporters.