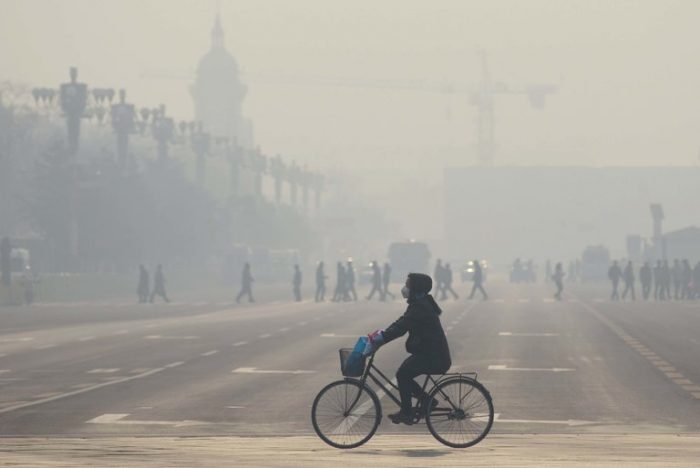 Public health experts have warned that antibiotic resistance could claim 10 million people each year by 2050. In early December 2016, researchers said they had discovered that livestock had become resistant to a class of antibiotics used only in humans. Now scientists have found the genes that make bacteria resistant to antibiotics in polluted air in Beijing, China. [1]

Read: Superbug Resistant to ALL Antibiotics Found in China

In the study, the team analyzed DNA sequencing from 864 different samples from humans, animals, and the environment. Some of those samples came from Beijing smog, and in those samples researchers identified a variety of genes that can make bacteria resistant to antibiotics.

It’s a scary announcement, but the discovery of the gene in the crowded city’s smog doesn’t necessarily mean people can get superbugs from the air. At this point, researchers only know that the aerial spread of such genes should be researched further – at least according to a paper in the journal Microbiome by researchers at the University of Gothenburg .

But if antibiotic resistance can be spread through the air, it means that the bacteria people pick up on surfaces around Beijing may become harder, if not impossible, to beat. In a city of 11.51 million people, there are plenty of bugs to go around. So even if drug-resistant bacteria can’t make someone sick through inhalation, that doesn’t mean they can’t sicken people in some other way.

“It’s not clear that bacteria in smog are a health threat.

What is clear is that the air isn’t clean. Pollution results in damage to airways that increases susceptibility to a wide range of viruses as well as bacteria.

One question not addressed is whether smog stabilizes bacteria in a way that normal air does not. Bacteria probably don’t replicate in the air. More likely that they settle somewhere and do, exchanging genetic material in liquid or on surfaces.” [2]

Joakim Larsson, director of the Centre for Antibiotic Resistance Research at the University of Gothenburg, is the lead author of the study. He said:

“We think this is really under-investigated and not taken seriously.” [1]

Speaking of bacteria replicating in liquid…

In addition to discovering the genes that cause antibiotic resistance in the air, Larsson and his colleagues also found a high amount of the genes in areas where there is a great deal of pollution from antibiotic manufacturing. Larsson’s past research shows that waste from manufacturing plants can end up in water sources. More regulation is needed to combat this problem, he said, adding:

“We need to apply discharge limits and have some regulation enforced. I think there’s sufficient data there to really call for some action.”

The most frightening part of the discovery was the fact that some of the genes can contribute to bacteria becoming resistant to carbapenems, a class of “last-resort” antibiotics.

How concerned people in Beijing should be about drug-resistant genes in the air seems to depend on whom you ask. But state news outlets have been doling out advice to Beijing residents, either out of genuine concern, or merely to assuage the worries of locals:

“To minimize illness during smog attacks, get enough sleep, eat foods that help you expectorate, flush out your nose with saltwater and wash your hands.” [2]