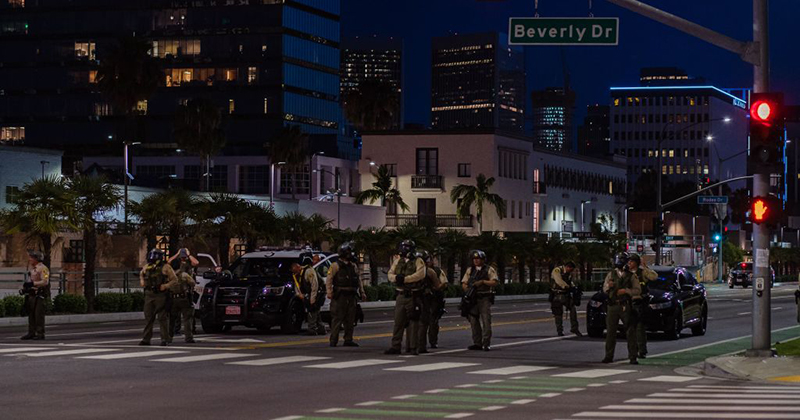 Los Angeles erupted in violence Saturday as protests over the death of George Floyd spiraled out of control in cities across the nation.

Stores from mom-and-pops to high-end retailers in ritzy Beverly Hills were looted, and in downtown Los Angeles, protesters sprayed graffiti and torched police cruisers while police shot rubber bullets into crowds and were seen beating demonstrators with batons.

Outrage over the death of black man Floyd – who was killed when a white cop knelt on his neck for more than eight minutes during his arrest Monday – is ramping up across the nation, with protests springing up in multiple states.

At least eight states and the District of Columbia have either activated or requested the National Guard including Minnesota, Georgia, Ohio, Colorado, Wisconsin, Kentucky, Utah and Texas as local law enforcement struggle to bring the carnage under control.

In Los Angeles, a demonstration that started out peaceful in the afternoon at the Grove, an outdoor mall, descended into violence as LAPD cars were set on fire and protesters smashed store windows, according to the Sacramento Bee.

Thousands of demonstrators flooded Beverly Hills’ Rodeo Drive on Saturday carrying signs like ‘Eat the rich’ and ‘George Floyd did not deserve to be murdered’. Footage captured people breaking into the closed Alexander McQueen store and making off with merchandise.

Horrifying footage on social media showed black actor Kendrick Sampson being struck by police batons and fired at with rubber bullets in the midst of the protest while screams ring out in the background.

He is heard asking officers ‘why are you hitting me?’ as cops in riot gear strike him with their batons and shoot him with rubber bullets as he appears to be protesting peacefully.