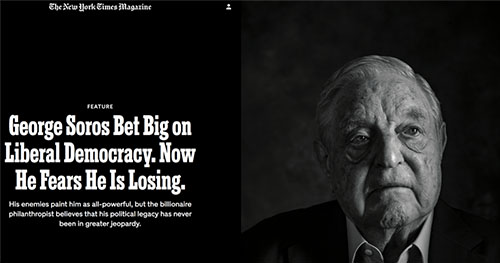 Soros, a megadonor and early supporter of Obama’s 2008 campaign, told the New York Times in a Tuesday interview that he felt professionally neglected by the former president during his two terms in office.

Obama was “actually my greatest disappointment,” Soros said. “He made one phone call thanking me for my support, which was meant to last for five minutes, and I engaged him, and he had to spend another three minutes with me, so I dragged it out to eight minutes.”

Then “he closed the door on me,” Soros added.

The Hungarian billionaire heard Obama didn’t appreciate his supporters, but figured the former president would still seek his counsel on certain policy matters — but that never happened.

“He was someone who was known from the time when he was competing for the editorship of The Harvard Law Review to take his supporters for granted and to woo his opponents,” Soros said.

Despite Obama failing in his attempts to weaken America and as President Trump wipes away his legacy, Soros is confident that America’s recovery will be short-lived.

“For every Trump follower who follows Trump through thick and thin, there is more than one Trump enemy who will be more intent, more determined,” Soros said.

However, he believes Obama’s failed legacy and the left’s Trump Derangement Syndrome – facilitated by Soros’ millions – has made the Democrat Party unviable.

“I shouldn’t say that. That would hurt them,” he mused.