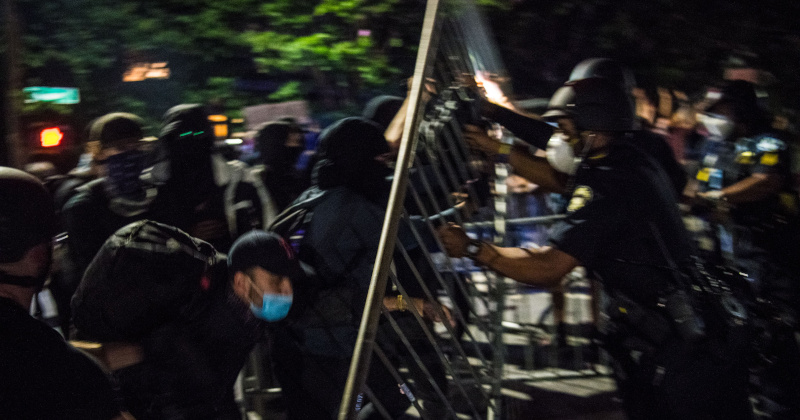 Shootings in the city have doubled in the wake of protests against police brutality.

Some 1,000 soldiers will be deployed to protect the state Capitol, the governor’s mansion, and the Department of Public Safety building that was vandalized over the weekend, Kemp announced Monday.

“Peaceful protests were hijacked by criminals with a dangerous, destructive agenda. Now, innocent Georgians are being targeted, shot, and left for dead,” Kemp said. “This lawlessness must be stopped and order restored in our capital city.”

This is a supervisor’s office at the command center of the @ga_dps HQ that was vandalized this weekend. Authorities say a homemade grenade was tossed into this room, where state @RepVernonJones tells reporters he backs @GovKemp’s pledge to “track down those responsible.” #gapol pic.twitter.com/bGA4jDW4mE

Atlanta Mayor Keisha Lance Bottoms has yet to comment on the deployment. She announced on Monday afternoon that she had tested positive for the coronavirus. Earlier, however, she pleaded with the citizens to stop the violence that claimed the lives of four people over the weekend. One of them was Secoriea Turner, an 8-year-old girl.

“This random wild, Wild West shoot-‘em-up because you can, has gotta stop. It has to stop,” she said, according to the Atlanta Journal-Constitution.

Between May 31 and June 27, some 93 people were shot in Atlanta – nearly double the number from the same time in 2019, the AJC reported. On top of the protests over the death of George Floyd in Minnesota, Atlantans were also outraged by the police killing of another African-American man, Rayshard Brooks, who was found drunk and asleep in a drive-through of a Wendy’s restaurant and stole a Taser from one of the officers while resisting arrest.

Protesters later torched that Wendy’s and on Saturday set up barricades around the destroyed restaurant. The child was killed when the car she was traveling in tried to get around the barricades and at least two men opened fire.

Atlanta police have drastically curtailed their activities after the two officers involved in the death of Brooks were charged with murder by the local local district attorney. Governor Kemp sided with the police and demanded that Bottoms get things under control.

The governor’s decision to deploy troops was “outrageous and will endanger lives,” said state senator Nikema Williams, who chairs the Georgia Democrats. She said Kemp, a Republican, was using the National Guard for the “selfish purpose” of protecting government buildings, rather than people’s lives.