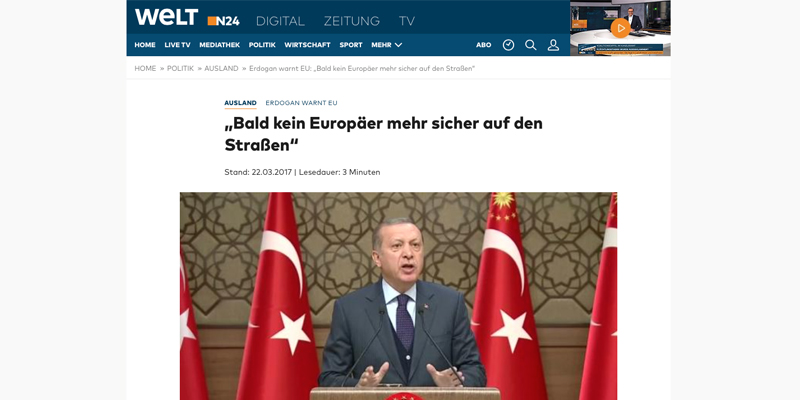 A top member of the German Parliament slammed Turkish President Recep Tayyip Erdogan as a “terrorism Godfather” who is seeking to promote a “Third Reich-style” foreign policy.

“Turkey’s foreign policy priorities… are reminiscent of the Third Reich,” said Sahra Wagenknecht, parliamentary head of the German Die Linke (Left Party), as she spoke before other members of her party in the Bundestag.

“Namely, it seeks to install [Turkish] minorities in other countries in order to pursue [Turkey’s] own violence-based policy, own geopolitics as well as its own policy of suppression there.”

Wagenknecht also referred to Erdogan as a “terrorist Godfather” in response to his recent comments suggesting Europeans would not be able to walk the streets safely if a diplomatic dispute between Turkey and members of the EU is allowed to continue.

“If you continue to behave like this, tomorrow in no part of the world, no European, no Westerner will be able to take steps on the street safely and peacefully,” he said, accusing the governments of Germany and the Netherlands of adopting “Nazi measures” when they prohibited representatives of the Turkish government from holding political events in their countries.

“This is a call for terrorism. Here speaks a terrorist, as simple as that,” Wagenknecht responded.

Following the decision by the Dutch government to bar entry to two Turkish ministers, Turkish expats rioted on the streets of the city of Rotterdam.

“An Islamic state like Turkey does not belong to Europe. All the values Europe stands for – freedom, democracy, human rights – are incompatible with Islam,” said Geert Wilders, head of the Party for Freedom (PVV), at the time of the riots. “Turkey voted for Erdogan, a dangerous Islamist who raises the flag of Islam. We do not want more, but less Islam.”

“So Turkey, stay away from us. You are not welcome here.”