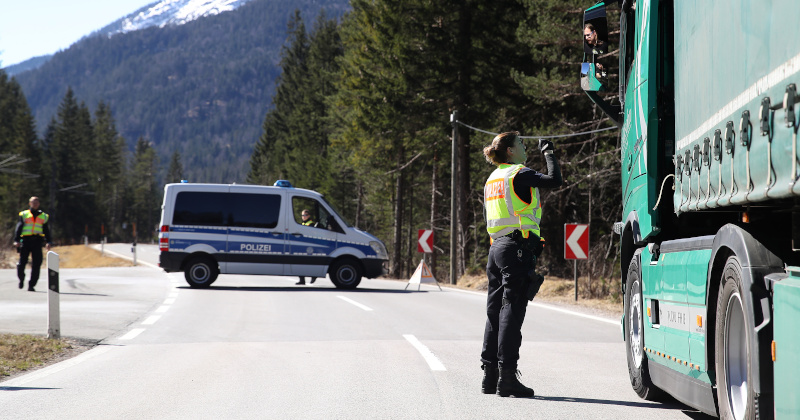 The spread of the deadly coronavirus epidemic has forced Germany to introduce travel restrictions and enhance control over people’s movements. But economic concerns are still high for Berlin.

On Monday morning, Germany imposed checks and suspended visa-free travel on its land borders with five nations: France, Austria, Switzerland, Denmark and Luxembourg. Poland, Belgium, the Netherlands and the Czech Republic have not been affected by the new restrictions so far.

From now on, foreigners crossing the border from any of the five nations in question must have “a valid reason to travel” or they will be denied entry to Germany, Interior Minister Horst Seehofer said as he announced the new measures.

“The spread of coronavirus is progressing very rapidly and aggressively,” he added, justifying the restrictions. “We have to assume that the peak of this development has not yet been reached.”

The control measures are not as draconian as they might seem at first glance. The restrictions mostly affect foreign tourists and holidaymakers travelling by road, since there is no information about any changes concerning international flights or railway services.

Germans can still come back regardless. “Of course, the German citizens have the right to return to their home country,” Seehofer noted. The same applies to foreigners with a residence permit in Germany.

Commuters and truck drivers trafficking goods through the border also enjoy a free pass, as long as they have valid documents issued by their employers.

“We are not prohibiting work,” the interior minister said, while Economy Minister Peter Altmaier assured concerned citizens that “we try to keep restrictions as limited as possible,” citing the need to avoid unreasonable hurdles in the movement of goods and economic activities.

EU Commission head and Germany’s former Defense Minister Ursula von der Leyen also seemed to be more concerned about the economy than healthcare. She warned about “thousands” of truck drivers stranded at the border because of new controls and said they could lead to replenishment problems for certain supermarkets.

“At the moment of crisis, it is of utmost importance to keep our common… market going,” she added.

The new measures are to remain in place “indefinitely” until the threat of coronavirus has passed, the German authorities said. Border closures are apparently still out of the question, however.

Still, he admitted that the officers are also exposed to coronavirus infections, adding that there are four confirmed cases among police personnel, with a further 240 officers quarantined as a precaution.

Meanwhile, some of Germany’s neighbors have introduced much more stringent restrictions.

Denmark has closed all its borders, allowing only Danish nationals to enter.

Tourists are now stopped from entering the country.

The Czech Republic’s borders have been closed not only to all Germans, but also the Italians, Austrians and French.

Poland has closed its borders to foreigners for 10 days and suspended international flights and rail services for two weeks. However, it is still allowing entry to commuters, people with residence permits and goods traffickers.