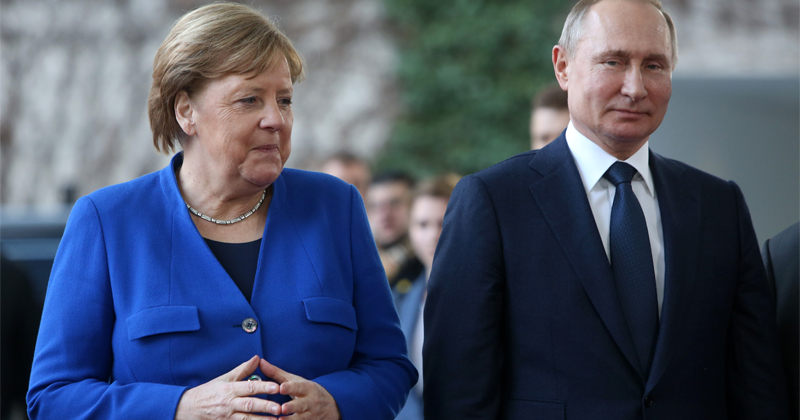 For much of the past year Trump has caused angst among allies by maintaining a consistent position that Russia should be invited back into the Group of Seven (G7), making it as it was prior to 2014, the G-8.

Russia had been essentially booted from the summit as relations with the Obama White House broke down over the Ukraine crisis and the Crimea issue. Trump said in August 2019 that Obama had been “outsmarted” by Putin.

But as recently as May when Germany followed by other countries rebuffed Trump’s plans to host the G7 at Camp David, Trump blasted the “very outdated group of countries” and expressed that he planned to invite four additional non-member nations, mostly notably Russia.

Citing coronavirus fears, Merkel bowed out, followed by others. But the Russia issue has remained on the table, with Trump refusing to back down.

Germany, however, has also refused to budge, per Reuters:

Germany has rejected a proposal by U.S. President Donald Trump to invite Russian President Vladimir Putin back into the Group of Seven (G7) most advanced economies, German Foreign Minister Heiko Maas said in a newspaper interview published on Monday.

Interestingly enough the Ukraine and Crimea issues were raised in the interview: “But Maas told Rheinische Post that he did not see any chance for allowing Russia back into the G7 as long as there was no meaningful progress in solving the conflict in Crimea as well as in eastern Ukraine,” according to the report.

Maas to some degree left a door open, suggesting that Russia’s biggest contribution to the G7 might be to facilitate a “peaceful solution” to the Ukraine crisis. “Russia also has to make its contribution, which is very slow in Ukraine,” Maas said.

Recall Trump’s previously unpopular comments on the issue blaming the past administration. “President Obama was helping Ukraine. Crimea was annexed during his term… President Obama was pure and simply outsmarted… it could have been stopped,” Trump said during the 45th G7 summit at the end of last summer held in Biarritz, France.

European officials have claimed Trump’s insistence on letting Russia back in has “ruined” past meetings among the lead economic powers.