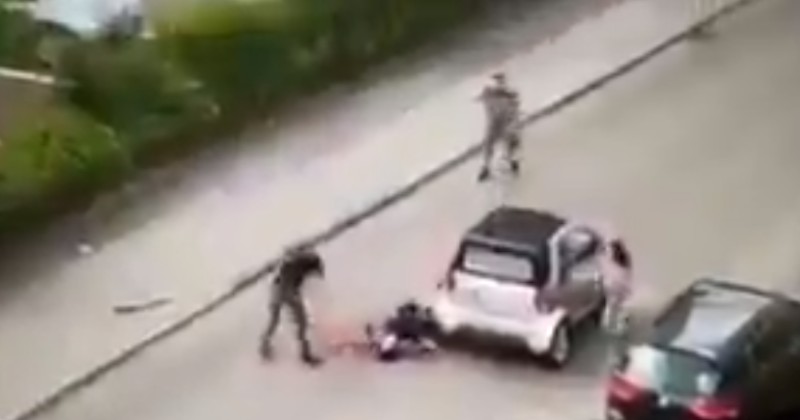 A Syrian migrant brutally killed a man with a sword during a broad daylight attack in Stuttgart, Germany.

The horrific incident was seen by numerous witnesses and began after the 28-year-old Syrian got into a heated argument with his 36-year-old German-Kazakh roommate.

A video of the incident shows the perpetrator ruthlessly plunging the sword into the victim as he lay on the ground. According to reports, the victim had his arm completely hacked off.

#Breaking: Just in – A Syrian migrant has killed a German local citizen in the city of #Stuttgart in #Germany with a sword like weapon, the person killed received so many slashes and stabs that the person would not be recognizable anymore. pic.twitter.com/7hTZ1S3Q91

Although the reason for the conflict is unknown, the perpetrator was heard repeatedly asking his victim, “Why have you done that?”

Video #2, from a different perspective: Sword killer hacking victim to pieces in Stuttgart/Fasanenhof. 😶

“The perpetrator attempted to escape using a bicycle, but police, who were pursuing him by helicopter, were eventually able to capture him,” reports Sputnik.

Suspect escapes on bike, is caught later that evening.

The shocking incident is likely to stir more debate over the influx of Syrian migrants into Germany over the last few years.

On Monday, an 8-year-old boy was killed after being hit by a high speed train when an Eritrean migrant pushed him and his mother onto the tracks at Frankfurt’s main station.