Muslim migrants armed with knives and metal bars attacked a nightclub in Frankfurt while screaming “Allahu Akbar” and “we are Arabs, we’ll kill you all!” during chaotic scenes in Frankfurt last week.

The incident began when two Syrian refugees started an argument in the Frog club, which was hosting a 90’s night, and “started provoking and harassing guests,” the club owner Dirk Schöbe told Berliner Morgenpost.

The two men began screaming, “we are Arabs, we’ll kill you all!” as guests panicked.

The culprits initially left the club but then returned with a large group of friends. Around 10 migrants armed with iron bars and knives then shouted, “We’ll kill you, we’ll kill you” and “Allahu Akbar,” which is Arabic for ‘God is great’ and is a mantra often said by terrorists immediately before an attack.

According to the chief prosecutor in the case, guests were then attacked and beaten while the gang threw stones at the building and at the victims.

“It was a war scene,” said Schöbe, adding, “We were celebrating ’90s – and suddenly we were in the war zone, not in our hometown, it was spooky.”

“It was pure horror, sheer horror, people were hit by stones, it was indiscriminate,” said Schöbe.

According to the prosecutor, all ten of the attackers were Syrian refugees.

After the two men who initially caused the argument attacked a nightclub visitor in the street the next day, they were arrested by police. One of the men had previously attacked someone with a baseball bat in August.

Mayor René Wilke responded to the incident by asserting that most of the area’s migrants are well behaved and don’t commit crimes.

The nightclub announced that it would run a repeat of the 90’s night which would be a “boisterous, happy, unpolitical, loose-fluffy, carefree 90s party.”

The attack happened amidst large protests and counter-protests in the town of Chemnitz, where a 35-year-old German was stabbed by two migrants.

Angela Merkel’s government responded to the demonstrations by suggesting that those protesting against mass immigration were all neo-nazis and xenophobes.

Germany has allowed in over 1 million migrants, predominantly from the Middle East, since 2015.

Violent crime has risen since that time, and 90% of it is due to migrants, according to the German government’s own statistics.

Ethnic Germans are now a minority in Frankfurt, with more than half of the city’s residents having a migrant background.

A recent Emmid poll of Germans found that 66% of voters believe the country has gone downhill since the 2015 mass migration, while just 17% think the country has improved.

Another poll found that the anti-mass immigration AfD party is now the second biggest in terms of popular support. 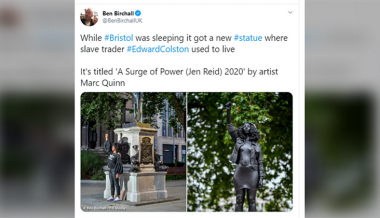