The United States is negotiating one of the biggest free trade agreements in history and there is barely a peep about it on the news.  Years ago, Ross Perot warned that if NAFTA was implemented there would be a “giant sucking sound” as millions of jobs left this country.  It turns out that he was right. Starting on Tuesday, the next round of negotiations on the Trans-Pacific Partnership (also known as the “NAFTA of the Pacific”) will beginin Chicago.  We have already seen the Obama administration push hard for free trade agreements with Panama, South Korea and Colombia and the administration is making the Trans-Pacific Partnership a very high priority.  Membership in the “NAFTA of the Pacific” already includes Brunei, Chile, New Zealand and Singapore.  The United States, Australia, Peru, Malaysia and Vietnam are scheduled to join.  Canada, Japan and South Korea are also reportedly considering membership.  So once this “free trade” agreement is ratified, will we hear another “giant sucking sound” as millions more of our jobs are shipped overseas?

Look, it is not really that complicated.  If you are a giant U.S. corporation, you can either make stuff here, or you can make stuff overseas where it is far, far less expensive to do so.

To greedy corporate executives, there are a lot of advantages to moving operations out of the country….

*It is legal to pay slave labor wages in many of these other countries.  After all, why pay an American worker 10 or 20 times as much as a worker on the other side of the globe?

*In many of these other countries you do not have to provide any health care for workers.

*In many of these other countries there are virtually no environmental controls to worry about.

*In many of these other countries there are virtually no labor standards to worry about.

By merging our economies with the economies of societies that are far different from our own, we have created a “race to the bottom” that is incredibly destructive to the U.S. economy.

In Vietnam, one dollar an hour is considered to be a very good wage.

So how do you plan to compete against that?

These “free trade agreements” are direct assaults on the big, juicy paychecks of American workers.

If you do not know about the Trans-Pacific Partnership, you need to get educated.

The following is a basic introduction to the TPP from Wikipedia….

The Trans-Pacific Partnership (TPP), also known as the Trans-Pacific Strategic Economic Partnership Agreement, is a multilateral free trade agreement that aims to further liberalise the economies of the Asia-Pacific region; specifically, Article 1.1.3 notes: “The Parties seek to support the wider liberalisation process in APEC consistent with its goals of free and open trade and investment.”[1] The original agreement between the countries of Brunei, Chile, New Zealand and Singapore was signed on June 3, 2005, and entered into force on May 28, 2006. Five additional countries – Australia, Malaysia, Peru, United States, and Vietnam – are negotiating to join the group.

Apparently, one of the goals of the TPP is to reduce all trade tariffs among member nations to zero by the year 2015.  The proponents of “free trade” are absolutely thrilled.

We have all enjoyed the flood of cheap products from overseas.  It is nice to pay a little bit less for things.

But these cheap prices have come at a very high cost.  We are literally destroying the American economy.  If you walk into just about any store today and you start turning over products, you will find that almost all of them are made out of the country.

If our middle class jobs keep getting shipped overseas, our prosperity is going to vanish.  If the American people allow this to continue, the standard of living of American workers is going to continue to fall toward the level of workers in third world countries.

Arthur Stamoulis, the executive director of Citizen Trade Campaign recently had the following to say about why he is opposed to this new free trade agreement….

“They’ve shipped our jobs overseas. They’ve reduced the tax base, they’ve driven down the wages and benefits for the jobs that are left. We’ve had enough”

As you can see from the chart below, we have seen a massive decline in manufacturing jobs in the United States over the last few decades…. 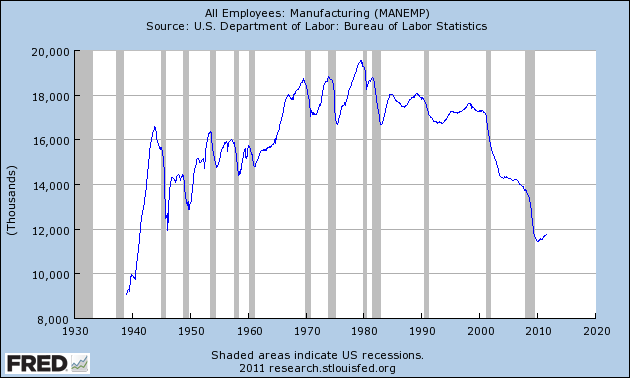 It is absolutely amazing that the Obama administration continues to tout more “free trade” agreements as a way to increase employment in the United States.

Sadly, nearly half the country is still going to run out and vote for the guy in the next election.

So the answer is to ship even more of our jobs overseas?

Apparently the Obama administration actually believes that we don’t want those jobs.  The following is what U.S. Trade Representative Ron Kirk told Tim Robertson of the Huffington Post recently….

Let’s increase our competitiveness… the reality is about half of our imports, our trade deficit is because of how much oil [we import], so you take that out of the equation, you look at what percentage of it are things that frankly, we don’t want to make in America, you know, cheaper products, low-skill jobs that frankly college kids that are graduating from, you know, UC Cal and Hastings [don’t want], but what we do want is to capture those next generation jobs and build on our investments in our young people, our education infrastructure.

Can you believe that nonsense?  He believes that there are things that “we don’t want to make in America”?

Why is nobody calling for him to resign immediately?

But now we are losing millions of those jobs and the Obama administration simply does not care.

America is being deindustrialized at warp speed and most Americans don’t even understand what is happening.

Look, even if U.S. firms wanted to stay in the United States and try to compete, they face almost insurmountable obstacles….

*Many foreign nations deeply and directly subsidize national industries and the U.S. government lets them get away with it.  That puts our industries at a vast disadvantage.

*The United States has the highest corporate tax rate in the world.  That puts our corporations at a vast disadvantage.

*Many foreign nations do not require businesses to provide health care for their employees.  That puts our businesses at a vast disadvantage.

*Many foreign nations impose very little regulation on businesses.  That puts businesses in the United States at a vast disadvantage.  In the U.S., we have some of the most restrictive regulations in the world.

The truth is that even the “next generation jobs” and the “green jobs” that Obama keeps talking about are rapidly leaving the country.

For example, the third-largest producer of solar panels in the United States, Evergreen Solar, is leaving America.

Evergreen is shutting down its factory in Massachusetts, laying off 800 American workers and moving production over to China.

A recent New York Times article explained why Evergreen is making this move….

Evergreen, in announcing its move to China, was unusually candid about its motives. Michael El-Hillow, the chief executive, said in a statement that his company had decided to close the Massachusetts factory in response to plunging prices for solar panels. World prices have fallen as much as two-thirds in the last three years — including a drop of 10 percent during last year’s fourth quarter alone.

Chinese manufacturers, Mr. El-Hillow said in the statement, have been able to push prices down sharply because they receive considerable help from the Chinese government and state-owned banks, and because manufacturing costs are generally lower in China.

We are losing the “jobs of the future” and Obama is doing nothing about it.

Last year, more than half of all the solar panels in the world were made in China.

China is absolutely killing us on the global economic stage and Obama does not even seem to think that it is a problem.

So don’t listen to any of the nonsense that Obama is spouting about creating jobs.

Not that most of the Republicans are putting forward any good ideas either.

The reality is that our politicians have lied to us.  Globalism is absolutely destroying our economy.

Do you remember when the United States was the dominant manufacturer of automobiles and trucks on the globe?  Well, in 2010 the U.S. ran a trade deficit in automobiles, trucks and parts of $110 billion.

We are losing ground in almost every industry that you could name.  Even the “jobs of tomorrow” are mostly being created overseas.

Andy Grove, the former CEO of Intel, says that our advanced technology companies are creating far more jobs overseas than they are in the United States….

Some 250,000 Foxconn employees in southern China produce Apple’s products. Apple, meanwhile, has about 25,000 employees in the U.S. That means for every Apple worker in the U.S. there are 10 people in China working on iMacs, iPods, and iPhones. The same roughly 10-to-1 relationship holds for Dell, disk-drive maker Seagate Technology (STX), and other U.S. tech companies.

When is someone going to wake up America?  If we are even losing “advanced technology” jobs, then what kind of jobs are going to be left?

In 2002, the United States had a trade deficit in “advanced technology products” of $16 billion with the rest of the world.  In 2010, that number skyrocketed to $82 billion.

Needless to say, that is not a good trend.

Our politicians promised us that the “global economy” would mean more jobs and more prosperity for us.

Well, that was obviously a giant lie.

Today, if you gathered together all of the unemployed people in the United States, they would make up the 68th largest country in the world.

If we allow all of this “free trade” nonsense to continue, our unemployment nightmare is going to continue to get worse and even more of our formerly great cities will end up looking like total hellholes just like Detroit does.

Sadly, virtually all of our politicians in both political parties are in favor of these “free trade” agreements.  In fact, most of them are pushing these kinds of agreements as one of the “solutions” to our problems.

The U.S. economy is being dismantled and deindustrialized right in front of your eyes.

If you plan on speaking out, you better do it now because it is almost too late to stop what is being done.

It is up to you America.