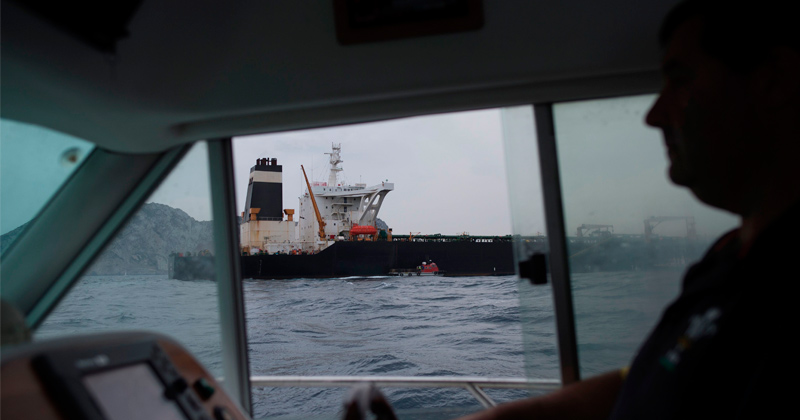 Police in Gibraltar have arrested the captain and the chief officer of Iran’s super tanker, ‘Grace 1’, which was earlier seized by British marines and local police officers, local media report.

Both men were arrested on Thursday afternoon and questioned. Yet, neither of them have been charged so far, the Gibraltar Chronicle reported, citing a police spokesman. The officers also seized documents and electronic devices from the ship.

The men, both Indian nationals, are suspected of breaching EU sanctions against Syria, the paper said.

The Panama-flagged and Singapore-owned oil super tanker was seized near the Strait of Gibraltar last week, sparking a diplomatic row between London and Tehran. The UK suspected the vessel of carrying oil to Syria in violation of EU-imposed sanctions.

The US said that the captured ship was transporting Iranian oil. Tehran confirmed it had links to the vessel but denied it was heading to Syria. Iran also branded the actions of the UK marines and the Gibraltar police as “piracy”and demanded the ship’s immediate release.

Earlier on Thursday, London said that its warship stopped Iran’s patrol boats from “impeding the passage” of a British tanker through the Strait of Hormuz. Tehran dismissed those claims as “worthless” and accused the UK of deliberately whipping up tensions in the region.

While the Gibraltar authorities have never officially linked the seizure and the arrests with the actions of Iran, pointing instead at the sanctions the EU imposed against Syria, these developments still conspicuously come amid the ongoing row between the UK’s allies in Washington and Tehran.

In mid-June, the US announced its plans to build a “global consensus” against Iran and later said it also wants to create a “coalition” to “ensure freedom of navigation both in the Straits of Hormuz and Bab-el-Mandeb.”

The fact that the UK – a major US ally – also tightened security of its own ships sailing near the Iranian territory while its forces in Gibraltar helped seize the vessel carrying Iranian oil might indicate that this move could potentially be linked to some other motives, going beyond the implementation of the EU sanctions against Damascus.