Once again, an intrepid Luke Rudkowski of WeAreChange dogs a reluctant New Gingrich and attempts to get the former disgraced Speaker of the House to fess up to frolicking at Bohemian Grove, the elitist event characterized as “the most faggy goddamned thing you could ever imagine” by Richard Nixon.

Video: Newt Tells Lie About His Attendance at Bohemian Grove

It’s often said the ability to lie convincingly is a job prerequisite for modern presidents. If so, Newt Gingrich has the skill down pat, although he will never get anywhere near the White House.

Newt lied (again) about attending Bohemian Grove the other day. Fact is, Newt not only attended the “most faggy goddamn thing you could ever imagine,” as Nixon deemed it, he delivered a speech there.

Instead of admitting it, he told Luke Rudkowski he’s living in a fantasy world. See the video below.

Here’s a photo of a much younger and slimmer Newtster at the “faggy goddamn thing” along with Bush the Elder and his son, George the Lesser. The photo is from the Annals of the Bohemian Club, Volume 7, 1987-1996. An Infowars.com reader sent it along back in 2004.

Jeff Cohen and Norman Solomon tried to get confirmation that Gingrich attended the “saturnalia of juvenilia” (as Maureen Dowd of the New York Times put it), but they were spurned by Gingrich staff writer Robert George, who admitted Newt had attended but there was no transcript of his speech.

People in serious denial of reality are usually characterized as suffering from mental illness. On numerous occasions Newt has declared 9/11 truthers are insane because they question the government’s contention that cavemen in Afghanistan were able to make NORAD stand down and defy the laws of physics.

So, is Newt insane for denying what is documented and readily available in the public domain?

Check out Alex’s classic coverage of Bohemian Grove at the Infowars Store. 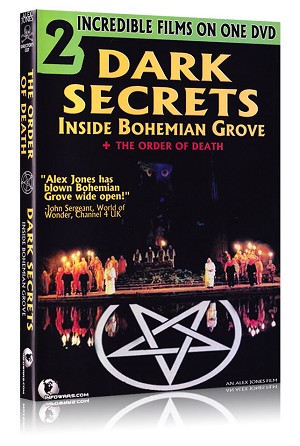