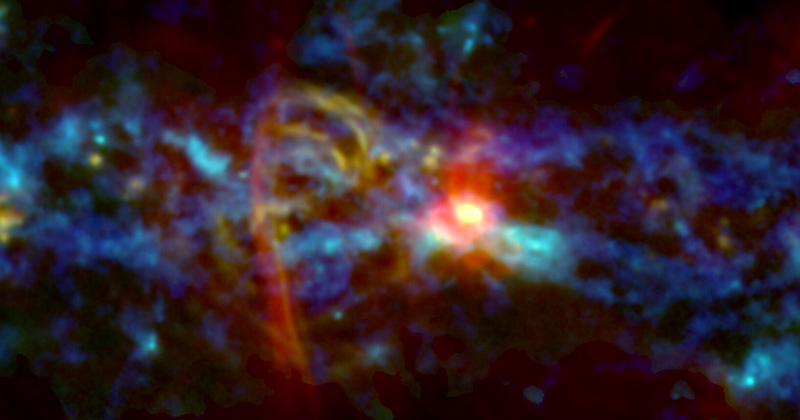 A feature resembling a candy cane appears at the center of this colorful composite image of our Milky Way galaxy’s central zone. But this is no cosmic confection. It spans 190 light-years and is one of a set of long, thin strands of ionized gas called filaments that emit radio waves.

This image includes newly published observations using an instrument designed and built at NASA’s Goddard Space Flight Center in Greenbelt, Maryland. Called the Goddard-IRAM Superconducting 2-Millimeter Observer (GISMO), the instrument was used in concert with a 30-meter radio telescope located on Pico Veleta, Spain, operated by the Institute for Radio Astronomy in the Millimeter Range headquartered in Grenoble, France.

“GISMO observes microwaves with a wavelength of 2 millimeters, allowing us to explore the galaxy in the transition zone between infrared light and longer radio wavelengths,” said Johannes Staguhn, an astronomer at Johns Hopkins University in Baltimore who leads the GISMO team at Goddard. “Each of these portions of the spectrum is dominated by different types of emission, and GISMO shows us how they link together.”

GISMO detected the most prominent radio filament in the galactic center, known as the Radio Arc, which forms the straight part of the cosmic candy cane. This is the shortest wavelength at which these curious structures have been observed. Scientists say the filaments delineate the edges of a large bubble produced by some energetic event at the galactic center, located within the bright region known as Sagittarius A about 27,000 light-years away from us. Additional red arcs in the image reveal other filaments.

“It was a real surprise to see the Radio Arc in the GISMO data,” said Richard Arendt, a team member at the University of Maryland, Baltimore County and Goddard. “Its emission comes from high-speed electrons spiraling in a magnetic field, a process called synchrotron emission. Another feature GISMO sees, called the Sickle, is associated with star formation and may be the source of these high-speed electrons.”

Two papers describing the composite image, one led by Arendt and one led by Staguhn, were published on Nov. 1 in the Astrophysical Journal.

The image shows the inner part of our galaxy, which hosts the largest and densest collection of giant molecular clouds in the Milky Way. These vast, cool clouds contain enough dense gas and dust to form tens of millions of stars like the Sun. The view spans a part of the sky about 1.6 degrees across—equivalent to roughly three times the apparent size of the Moon—or about 750 light-years wide.

To make the image, the team acquired GISMO data, shown in green, in April and November 2012. They then used archival observations from the European Space Agency’s Herschel satellite to model the far-infrared glow of cold dust, which they then subtracted from the GISMO data. Next, they added, in blue, existing 850-micrometer infrared data from the SCUBA-2 instrument on the James Clerk Maxwell Telescope near the summit of Maunakea, Hawaii. Finally, they added, in red, archival longer-wavelength 19.5-centimeter radio observations from the National Science Foundation’s Karl G. Jansky Very Large Array, located near Socorro, New Mexico. The higher-resolution infrared and radio data were then processed to match the lower-resolution GISMO observations.

Blue and cyan features reveal cold dust in molecular clouds where star formation is still in its infancy. Yellow features, such as the Arches filaments making up the candy cane’s handle and the Sagittarius B1 molecular cloud, reveal the presence of ionized gas and show well-developed star factories; this light comes from electrons that are slowed but not captured by gas ions, a process also known as free-free emission. Red and orange regions show areas where synchrotron emission occurs, such as in the prominent Radio Arc and Sagittarius A, the bright source at the galaxy’s center that hosts its supermassive black hole.