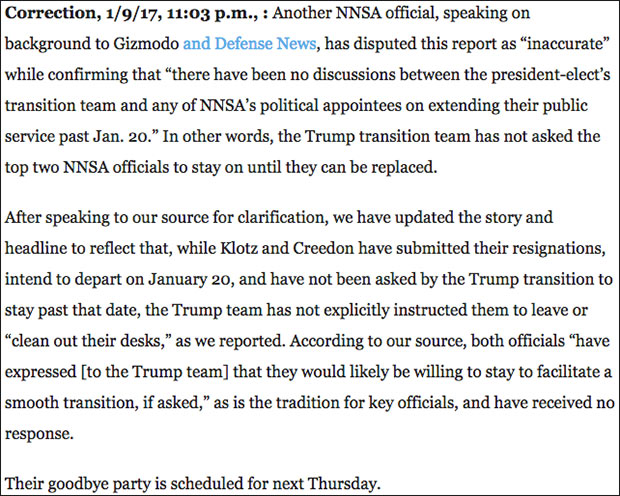 In the original report, Gizmodo alleged the president-elect’s transition team ordered both the head of the National Nuclear Security Administration and his deputy Friday “to clean out their desks” prior to Trump’s inauguration.

“The NNSA is the $12 billion-a-year agency that ‘maintains and enhances the safety, security, and effectiveness of the U.S. nuclear weapons stockpile,'” Gizmodo writes.

“As far as I can tell, this is unprecedented—January 20 will mark the first time in the NNSA’s 17-year history that it will exist wholly without its appointed leadership.”

The story immediately stirred outrage among Trump’s fiercest critics, who saw the shocking news as further validation of their worst fears.

But shortly after 11PM, Gizmodo added a correction to the bottom of the article that reversed the story’s entire premise.

The correction notes that another NNSA official disputed the claims as “inaccurate” before providing a separate explanation.

“There have been no discussions between the president-elect’s transition team and any of NNSA’s political appointees on extending their public service past Jan. 20,” the second source said.

Gizmodo clarified that “the Trump team has not explicitly instructed them to leave or ‘clean out their desks,’ as we reported.”