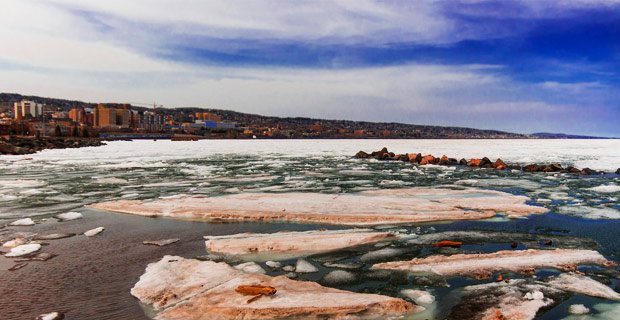 In complete contrast to the claims of “global warming,” Lake Superior has experienced the highest concentration of ice in late May since modern satellite records began in 1980, and the ice coverage may even be the highest since at least 1897.

In comparison, reconstructed past records on the largest of the Great Lakes of North America show that ice coverage for May is typically far, far less and ice is almost unheard of for June, which is fast approaching.

The records also indicate that average April ice coverage for Lake Superior is usually 17%, but the lake was covered nearly 60% in ice last month.

None of these facts, of course, fit into the “global warming” rhetoric promoted by the White House, which has since rebranded “global warming” as “climate disruption” in an attempt to spin this year’s record cold weather into its carbon tax agenda.

It’s almost June, and the ice is still lingering on Lake Superior. Check out our gallery here: http://t.co/mM8fJBga28 pic.twitter.com/n213RiT448

“A growing body of evidence suggests that the extreme cold being experienced by much of the United States as we speak is a pattern that we can expect to see with increasing frequency as global warming continues,” claimed Obama science czar John P. Holdren, who advocated the formation of a global police force that would enforce totalitarian measures for social control in his 1977 book Ecoscience.

It should be no surprise that someone who would advocate a planetary regime would also advocate the expansion of governments around the world in order to combat so-called “global warming.”

This strategy was laid out in The Report from Iron Mountain, a 1966 think tank study written by government analysts no different than Holdren who explored the ways a government could perpetuate itself in power while preventing its citizens from rebelling.

“Roughly speaking, the presumed power of the ‘enemy’ sufficient to warrant an individual sense of allegiance to a society [government] must be proportionate to the size and complexity of the society,” the report stated. “Today, of course, that power must be one of unprecedented magnitude and frightfulness.”

The report suggested that a suitable candidate for that enemy, the global threat, was the environmental-pollution model, of which “global warming,” or “climate disruption,” fits right into.

“This was viewed as the most likely to succeed because it could be related to observable conditions such as smog and water pollution – in other words, it would be based partly on fact and, therefore, be credible,” G. Edward Griffin wrote in his book The Creature from Jekyll Island. “Predictions could be made showing end-of-earth scenarios just as horrible as atomic warfare.”

“Accuracy in these predictions would not be important; their purpose would be to frighten, not inform.”

And the recent “global warming” predictions pushed by the White House can be described as fear mongering to say the least.

Just last week, Secretary of State John Kerry warned graduates of Boston College that they have utter annihilation to look forward to if they don’t take “climate change” more seriously.

“And I know its hard to feel the urgency as we sit here on an absolutely beautiful morning in Boston,” he said. “You might not see climate change as an immediate threat to your job, your communities or your families.”

And on Monday, Prince Charles, who shares many of the same views as the Obama administration, suggested that capitalism must end as we know it in order to stop the “dangerously accelerating climate change” that would “bring us to our own destruction.”

Such rhetoric has already increased anxiety levels across the board for children who are now afraid the planet is doomed due to “climate disruption” and populations around the world are being told that “climate change” will displace millions of people, increase violent crimes and rapes and wipe trillions from world economies.

“The masses would more willingly accept a falling standard of living, tax increases and bureaucratic intervention in their lives as simply ‘the price we must pay to save Mother Earth,” Griffin added. “A massive battle against death and destruction from global pollution [such as global warming] possibly could replace war as justification for social control.”