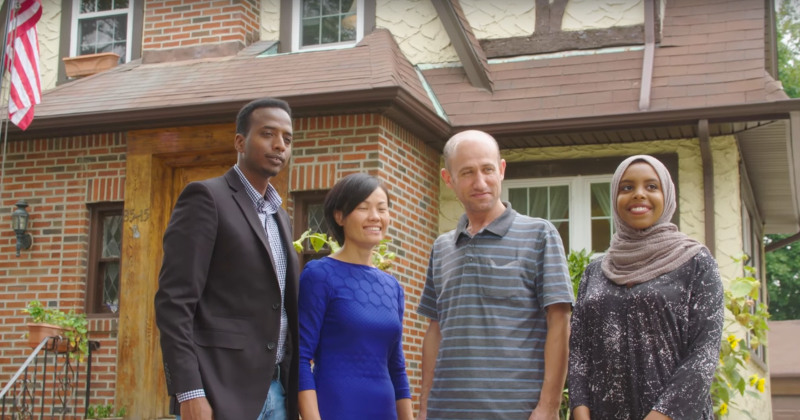 A house in Queens, NY, which was built by President Trump’s father and served as home to the Trump family until Donald was 4-years-old, is currently owned by a limited liability corporation called Trump Birth House, and was available to rent for $725 per night through AirBnb until the listing was recently pulled.

Oxfam took advantage of the home’s accessibility, renting it for a day, and inviting four refugees of varied backgrounds to visit the site, which was decorated with a ‘Refugees Welcome’ door mat symbolically laid outside the front door.

The house was redecorated with additions supplied by Oxfam, including, “refugees’ coffee cups and serving trays on the table, books and photos on the desk, and children’s toys in President Trump’s childhood bedroom. The items draw the parallel between this upper middle class house in Queens, the homes and lives refugees have left behind, and their points of refuge along the way.”

“The refugees who came to President Trump’s childhood home have been welcomed by Americans in their communities and are contributing greatly in return. Their experiences give a face and a voice to an issue that is too often politicized with myths, lies, and fears.”

While Oxfam acknowledges that the ‘refugee crisis’ is a highly-politicized issue, they fail to mention that the keyword ‘refugee’ is generally a politicized myth in and of itself.

The United Nations refugee agency recently admitted that what has long been referred to as a ‘refugee’ crisis, has little to do with true ‘refugees’ and virtually everything to do with illegal immigration and human trafficking, and as Infowars reported, “new figures show that just 1.4% of migrants arriving in Italy are Syrian refugees, confirming the fact that the overwhelming majority of people flooding into Europe are economic migrants from countries not at war.”

Additionally, a recent report from the Center for Immigration Studies detailed findings that a single refugee imported from the Middle East to the US consumed the same financial resources as providing care and shelter for 12 refugees who remain in secure areas in the Middle East – raising questions as to why ‘refugees’ are both being invited, and guided, to locations thousands of miles from their homelands.

“Oxfam hosted refugees at President Trump’s childhood home to declare that all people, refugees included, have the right to a safe place to call home,” said Oxfam director, Shannon Scribner. “What makes America great is our diversity of experiences, ideas, talents, and the opportunity for anyone to succeed. What better place to represent that than the former home of the President of the United States in Queens, NY – one of the most diverse communities in the world.”