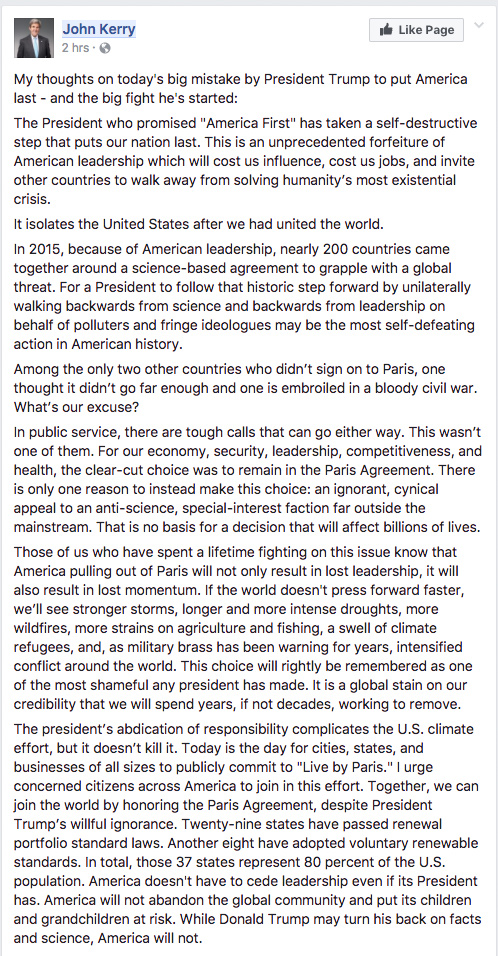 Liberals went into hissy fits after President Donald Trump announced the US would exit the Paris climate pact, with some world leaders complaining it was the worst thing Trump could ever do.

Over at the Huffington Post, Trump’s departure from the climate treaty and offer to re-negotiate a better deal for America equated to the end of the world.

The heads of state of France, Germany and Italy issued a joint statement saying they “regret the decision by the United States of America.”

Statement from the leaders of Italy, France and Germany: the Paris Climate Agreement cannot be renegotiated — we're moving ahead pic.twitter.com/sY7egTd3Zo

Ahead of the decision, billionaire climate activist Tom Steyer claimed Trump would be “committing a traitorous act of war against the American people.”

If Trump pulls the US out of the #ParisAgreement he will be committing a traitorous act of war against the American people. My statement: pic.twitter.com/Qjgxm4fELp

The liberal governors of California, New York and Washington announced the formation of the “United States Climate Alliance,” a coalition of states dedicated to helping “fill the void left by the federal government.”

After the president used the name of his city as a representative example of an American town, the Mayor of Pittsburgh tweeted they would continue to “follow the guidelines of the Paris Agreement.”

As the Mayor of Pittsburgh, I can assure you that we will follow the guidelines of the Paris Agreement for our people, our economy & future. https://t.co/3znXGTcd8C

The United States joins Syria, Nicaragua & Russia in deciding not to participate with world's Paris Agreement. It's now up to cities to lead

Statement from Barack Obama on the Paris Climate Agreement pic.twitter.com/SQc6kQV0Ah

President Trump’s decision to withdraw from the #ParisClimateAgreement is a devastating failure of historic proportions. pic.twitter.com/UdtXt8EiDe

Trump's decision to withdraw the US from the Paris climate agreement is an abdication of American leadership and an international disgrace.

In a Facebook screed, failed presidential candidate and Skull and Bones member John Kerry said Trump’s exit from the climate agreement was “a self-destructive step that puts our nation last.”