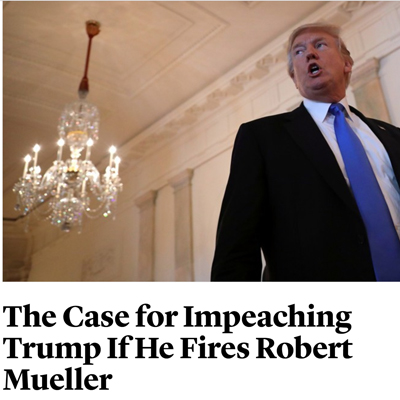 A top globalist publication has called for President Donald Trump to be impeached in the event he fires Robert Mueller, a former FBI director appointed to investigate alleged Russian interference in the last election, a narrative pushed by the #NeverTrump movement and Democrats.

“If Trump fires Robert Mueller, few will be surprised. But if that happens, as the Department of Justice is thrown into chaos, as the American public sees its clearly expressed support for the special counsel disregarded, as the vital inquiry into the integrity of American elections stalls, as protesters take to the streets in a show of outrage at the affront to the rule of law, as the 2018 midterms morph into a referendum on the administration, and as American democracy reels into unknown territory, the House of Representatives should immediately impeach the president,” wrote Conor Friedersdorf in The Atlantic.

While acknowledging impeachment is “undesirable,” Friedersdorf argued keeping Trump in office “would be too risky. To trust him would be too reckless. Prudence would require his removal.”

Citing Federalist 65, written by Alexander Hamilton in 1788, Friedersdorf argued the phrase “high crimes and misdemeanors” should be not be defined solely as criminal charges found in penal codes.

Rather, they should be defined as “those Which proceed from the misconduct of public men, or in other words from the abuse or violation of some public trust. They are of a nature which may with peculiar propriety be denominated political, as they relate chiefly to injuries done immediately to the society itself.”

The potential firing of Muller would, in Friedersdorf’s eyes, constitute an impeachable offense.

“To fire Robert Mueller now would not only transgress against the clear will of the public and undermine both the substance of the Russia investigation and confidence in its results––it would cause that damage to the investigation just as Trump’s family members and close associates are coming under scrutiny due to their Russia ties, and even as investigators weigh whether Trump’s finances are relevant,” he said.

Former CIA Director John Brennan went so far as to call for a coup against President Trump by those in government if he decided to fire Mueller.

“I think it’s the obligation of some executive branch officials to refuse to carry that out,” he told CNN’s Wolf Blitzer at the Aspen Security Forum. “I would just hope that this is not going to be a partisan issue. That Republicans, Democrats are going to see that the future of this government is at stake and something needs to be done for the good of the future.”