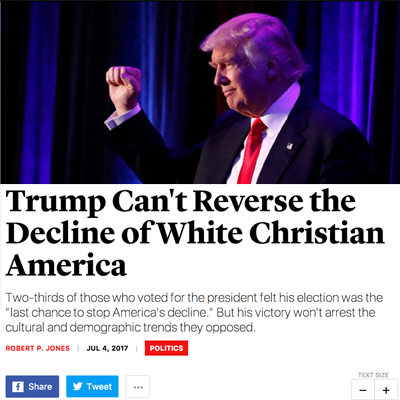 Despite claims President Donald Trump’s victory over Hillary Clinton marked a resurgence in the voting power of Christians in America, a globalist publication is claiming the last election was “the death rattle of White Christian America.”

“Republicans entered 2017 with control of both houses of Congress and the White House, and because the Republican-controlled Senate refused to consider an Obama appointee to replace Justice Antonin Scalia, who died in early 2016, Trump was able to nominate a conservative Supreme Court justice right out of the gate.”

“The evidence, however, suggests that Trump’s unlikely victory is better understood as the death rattle of White Christian America — the cultural and political edifice built primarily by white Protestant Christians — rather than as its resuscitation.”

While white evangelical Christians represented 21% of the general population at the time of the 2008 election, they comprised 26% of actual voters. In 2016, despite a decline in their proportion of the population to 17%, white evangelicals continued to represent 26% of voters – clear evidence President Trump’s warnings about the dire attacks on religious liberty resonated with evangelical voters.

“Despite the outcome of the 2016 elections, the key long-term trends indicate White Christian America’s decline is continuing unabated,” Jones suggested. “Over the last eight years, the percentage of Americans who identify as white and Christian fell 11 percentage points, and support for same-sex marriage jumped 18 percentage points.”

“Donald Trump’s campaign painted a bleak portrait of America’s present, set against a bright, if monochromatic, vision of 1950s America restored. Hillary Clinton’ campaign, by contrast, sought to replace the first African American president with the first female president and embraced the multicultural future of 2050, the year the Census Bureau originally projected the United States would become a majority nonwhite nation,” Jones claimed.

Jones, the chief executive of the Public Religion Research Institute, first made his opinions about the decline of white Christian America known in an op-ed written in the immediate aftermath of Trump’s victory.

“The waning numbers of white Christians in the country today may not have time on their side, but as the sun is slowly setting on the cultural world of white Christian America, they’ve managed, at least in this election, to rage against the dying of the light,” he wrote in The New York Times.