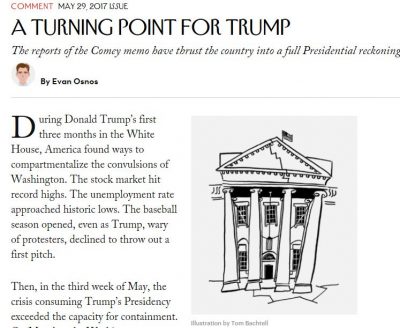 The New Yorker, a globalist publication that recently pushed the removal of President Trump from office, now suggests the existence of the so-called Comey memo has plunged the Trump administration, and the country, into “the full machinery of Presidential reckoning.”

“For the first two years of Trump’s political career, no scandal could stall his rise. Comey’s revelation marked the threshold of a new era, thrusting Trump and the country into the full machinery of Presidential reckoning, an American ordeal not experienced since the Clinton-era Washington wars of two decades ago,” wrote Evan Osnos in The New Yorker magazine. 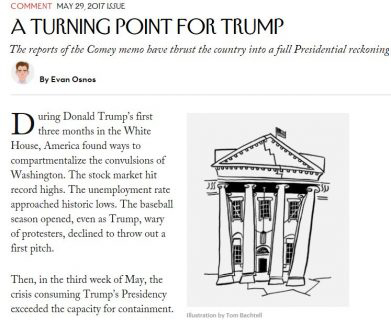 Osnos continued by subtly advising Trump administration staffers to quit – and reveal information about the inner workings of the administration in order for the public to “make sense of the dysfunction.”

“There is a long tradition of staffers leaving a troubled White House and then helping the public make sense of the dysfunction,” Osnos noted, specifically citing former press secretary for president George W. Bush, Scott McClellan, who quit in 2006 and wrote a scathing memoir describing Bush as “authentic” but “terribly off course.”

Rick Wilson, an establishment Republican consultant, columnist for The Daily Beast, and fierce opponent of Trump who once urged the donor class to “go out and put a bullet in Donald Trump,” also urged the president’s aides and staff to quit in order to avoid going out “like a Ba’ath Party generalissimo.”

“When regimes collapse, dead-enders are the most fascinating to watch — the ones who end up with the profitable concessions and sought-after mistresses,” Wilson wrote in the Washington Post. “You know already, though, that’s probably not you. So when this regime falls, ask yourself: Do you want to be among those who said ‘not me’ or do you want to go out like a Ba’ath Party generalissimo?”

“Cutting ties with a man who is destructive to our values, profoundly divisive, contemptuous of the rule of law and incontrovertibly unfit to serve in the highest office in the land just might. Do it now.”

While suggesting that, with each new alleged scandal, President Trump’s aides are “acquiring a strange new power over him, because they will decide when to protect him and when to protect themselves,” Osnos expressed doubt that any staffers will abandon him.

“If Donald Trump has one fundamental commitment, it is to his own preservation, a celebration of personal well-being that he has elevated to a world view—the very world view that made men and women want to work for him in the first place. There is little reason for them to adopt a more selfless creed now.”

Osnos is the same staff writer who recently reported on secret conversations with President Trump’s “friends and advisers; to lawmakers and attorneys who have conducted impeachments; to physicians and historians; and to current members of the Senate, the House, and the intelligence services” to remove Trump from office by declaring him mentally unfit for office under the 25th Amendment.

This is part of the shadow government’s “continuity of government” (COG) gameplan to try and overthrow President Trump.

The fact that the New Yorker and other globalist mouthpieces are trying to sell the idea publicly indicates it was already quietly under discussion amongst the network of globalists embedded in the various government think tanks and agencies inside the beltway that had supported Hillary Clinton in her failed presidential bid.

And to further erode the American ideal of constitutional law, the New Yorker also recently claimed the American Revolution “was a mistake.”

“And what if [the American Revolution] was a mistake from the start?” wrote long-time staff writer Adam Gopnik. “The Declaration of Independence, the American Revolution, the creation of the United States of America—what if all this was a terrible idea, and what if the injustices and madness of American life since then have occurred not in spite of the virtues of the Founding Fathers but because of them?”